Llandegfedd Reservoir
Not to be outdone by the posse of Black-necked Grebes at Ynysfro, Llandegfedd has produced a Red-necked. First reported as a 'possible' on Friday, it became a 'definite' today and, a little while later, was on my yearlist. Whilst driving round the reservoir I also bagged a, long overdue, Pheasant (get in there!). The Red-necked Grebe was also my county tick and a second year/county double appeared in the gull roost - an adult Yellow-legged Gull, unfortunately no Med Gull joined the party, but one out of two ain't bad. Ninety-two species have fallen. 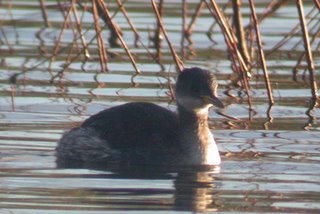 Posted at 18:23
Email ThisBlogThis!Share to TwitterShare to FacebookShare to Pinterest