Ynysfro Reservoirs
The yearlist got off to an inauspicious start as I bowled up at the reservoirs minus scope, having left my Swaro in somebody else's motor. Luckily two, of the three, Black-necked Grebes fell to the bins, as did most of the usual Ynysfro regulars plus (presumably due to the attraction of a partially dry lower basin) Wigeon, Teal and GBB Gull.

Collister Pill
Having recovered my scope, it was off to Collister for the reported Snow Bunting. A few days back, I'd walked the sea-wall and failed to see the little bleeder, mind you, the combined influences of a girlfriend and an icy gale hadn't helped. This time I was birding unfettered and in the 'zone', I was either going to see it, or leave after dark.
As it turned out, I more-or-less did both, three hours and three traverses of the saltmarsh were needed before I blundered onto the bird. In true Snow Bunting style it allowed close approach and gave cracking views and photo ops (see below); a smart bird and a Gwent-tick to boot. During the search I'd built up a reasonable supporting cast including: Merlin, Little Egret and Golden Plover. I'd also thrown away a probable Water Pipit; as I'd approached the 'seaward' edge of the pill, a bulky pipit bolted out of the saltmarsh in front of me, gave a strident "fwist", seemed to show a clean belly and then proceeded to do a flipping great circuit before diving back into the vegetation (sounds pretty good doesn't it?). I then spent a good half hour trying to relocate the bashful little b*stard, but it obviously had something better to do than give itself up to me and, not being able to definitely rule out Scando Rock, I left it to it. 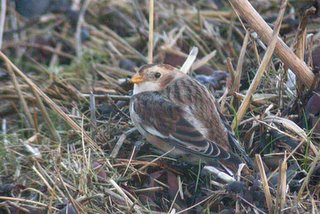 At the end of day one I've amassed 51 species, not a supersonic start, but a few quality Gwent birds have been safely bagged.
Posted at 20:39
Email ThisBlogThis!Share to TwitterShare to FacebookShare to Pinterest