Everything is a bit of a blur. I'm asleep, or mostly asleep, stumbling around in that pre-cuppa Proustian netherworld, the voice of BBC News and the first of the kettle's wispy whistles vie to pierce the fuzz. Mug of tea, bowl of bran, another mug of tea and then the mobile pings, momentarily glows, returns to dull-faced slumber. Already, the 24 hour rolling news carousel is embarking on another turn of the merry-go-round of the same reporters', intoning the same lines about the same stories. Reaching for the phone, thumb depresses the one non-virtual, square emblazoned, circular button:

Who found it? When? Still there? Calls, texts, tweets and it's off, the car pointed towards the estuary and right foot down a bit. 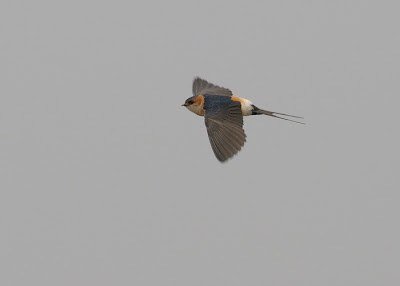 One of three Red-rumped Swallows in the UK today, the others being in Scilly and East Yorkshire. Interestingly though, one was on Lundy yesterday, of which photographs were taken but have yet to make it onto the web. Same bird? We shall see. 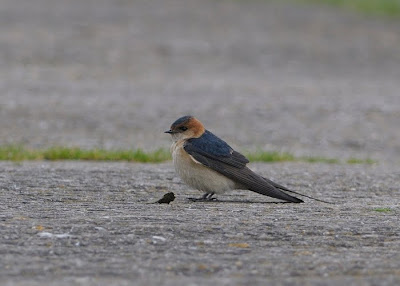 The bird appeared to be a first-summer/second calendar-year bird. Whilst in flight the innermost greater coverts were hidden by the scapulars, at rest two of these seemed to be pale-tipped, retained juvenile feathers.

Another first for Gwent find for JB,... and county/patch ticks all round. Untrammelled joy.
Posted at 23:56
Email ThisBlogThis!Share to TwitterShare to FacebookShare to Pinterest

Beautful photo's of a little stunner, thanks.