Too tired to blog properly now but, in short (to be updated at some point in the near future): dove, yes; gull, no. 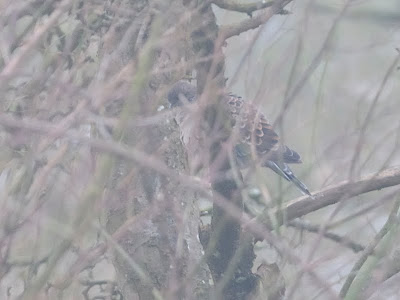 The less than inspiring view from the cosy kitchen at Number 41, thanks to the f**ktard who didn't know his camera's arse from its elbow and managed to fire his flash at the bird which went from feeding on the lawn during his £5 time slot to preening in the tree during mine. 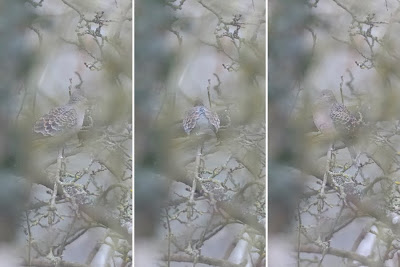 [Addendum: There really isn't much to add except two Bramblings at Number 41, Ring-necked Parakeet over the M25 and 'The Fringe' at Rainham. As a wise man, although I'm not sure which, once said, "Brevity blah blah blah".]
Posted at 23:22 No comments:
Email ThisBlogThis!Share to TwitterShare to FacebookShare to Pinterest

Another heroic offshore intelligence gathering skirmish in the ongoing battle against the big blue wobbly; another man downed during on-off-on contact with the indefatigable green-faced enemy. Given the Met Office forecast included the phrases 'gale force' and 'high seas' it could have been a lot worse but, since using vessels with pointier bows and keels, it appears sea legs are no longer the rare commodity they once were. As per the last outing, seabird action was predictable and uninspiring and, despite the weather, small cetaceans provided the highlights.

Once again we had Pyuc Hoymans, our 'war artist', along with us. Exposing the gap between represented image and historical event his paintings delve into the inner workings of how ornithological mythology is created. The reality of Hoymans' work is almost 'twee', pleasing images of a birder or item of survey equipment pass quite comfortably as aesthetic totems; it's only their cognitive association with the pallid horror of the eye-watering overboard retch, or the sweaty-browed atrocities of the humid, gravy-infused interior, that encapsulates the true banality of evil - the unspeakable horror in a discarded night-sight, the monstrous potential of an empty washing basin. Pyuc Hoymans' paintings consciously fall desperately short of the iconic, becoming vestiges posed as counterfeit emblems for that which cannot be conveyed as, I'm sure you'd agree, can be seen in the following example. 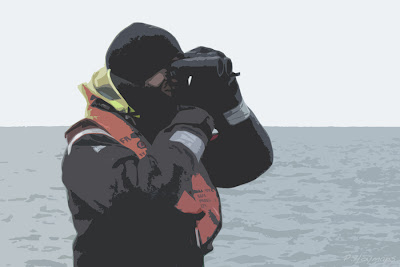 Pyuc Hoymans, 'Pterodroma behind ya!'
2011, pigment-based ink on paper
16 x 25 cm
Posted at 22:23 No comments:
Email ThisBlogThis!Share to TwitterShare to FacebookShare to Pinterest

The end of a trouser 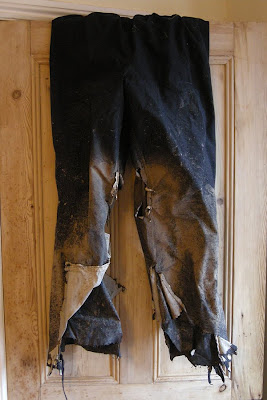 Goodbye Lowe Alpine Triple Point Ceramic, you served me well but barbed wire and pointy things on boots have torn you asunder,...

Hello Rab eVent!
Posted at 16:00 No comments:
Email ThisBlogThis!Share to TwitterShare to FacebookShare to Pinterest

Whilst sitting inside avoiding the rain...

... I noticed this over on the South Wales blog. I also noticed only team members can leave a comment so, given no other bugger had responded and at the insistence of my barely containable, bordering on neurotic pedantry, I felt compelled to answer Mr. Smith's queries...

1. "Do all first winter blackcaps have brown heads?"

No, following completion of the partial post-juv moult (late summer/early autumn), 1st-winters have more-or-less adult coloured crowns; however, a small number of brown feathers are often shown by 1st-winter males but usually go unnoticed. Extensively 'brindled' birds, as shown in the post, are the extreme end of the spectrum.

2. "If so, sexing young Blackcaps pre head moult is almost impossible and would account for the higher proportion of females (?) reported in the 2nd winter period (Oct-Dec)?"

Moult of head feathering is part of the post-juv moult mentioned above. I'm not aware of a "higher proportion of females (?) reported"? [NB. '2nd winter' generally refers to a bird's second winter not the Oct-Dec period, males showing some brown in the crown would almost exclusively be in their 1st-winter.]

3. "Adult males with black heads in this period are OK - but maybe not all 'brown headed' Blackcaps are females?"

Basically by early autumn all Blackcaps have the 'correctly' coloured head according to sex. However, during exceptional views or with photos you might still be able to age them, e.g. if you can detect a moult contrast in the greater coverts (the post-juv moult only replaces a varying number of these, leaving two generations of feathers which differ slightly in structure, colour, wear and length) or ascertain tail feather shape (juv tail feathers, which aren't replaced until completion of the birds first breeding season, are generally more worn and less rounded at the tip than subsequent generations, beware wet adult type feathers).

PS. If any of the above reads like tutelage in egg sucking, then I apologise, but, take a bow, because that makes you a granny.
Posted at 21:22 No comments:
Email ThisBlogThis!Share to TwitterShare to FacebookShare to Pinterest

You've got red on you 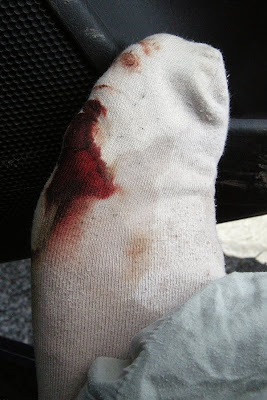 I knew I shouldn't have got those wellies with the stiletto heel,... when poked it goes a bit squidgy-oozy-sticky.

Some corner of an external hard drive, that is for ever Turkey

Digging out some 'Turkey 2009' information yesterday proved an excellent excuse to waste a while going back through a few photos,... 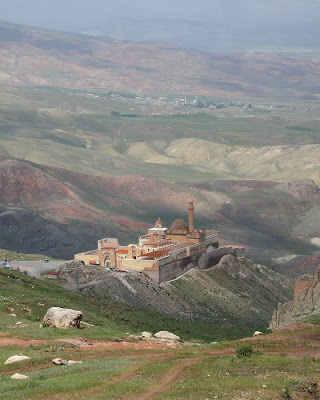 İshak Paşa Sarayı a classic WP birding location near Doğubeyazıt. Construction appears to have been quite a drawn out affair, started in 1685 by Ҫolak Abdi Paşa and completed by his grandson İshak Paşa in 1784. However, more importantly, the slopes above the palace were the original WP site for Mongolian Trumpeter Finch. 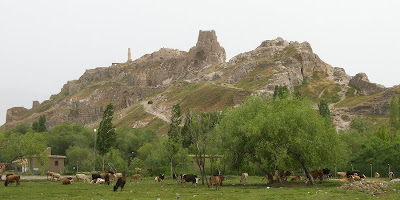 Van Kalesi, the Lonely Planet guide warns, rather ominously, "... the groups of men and children that tend to loiter at the site can be intimidating. Make sure you're back on the main road by sunset." Luckily having not read the guide, we spent an evening birding nearby and lived to tell the tale, the most memorable 'happenings' were Lesser Kestrel, Hobby and Alpine Swift hunting overhead at dusk; Citrine Wagtail and singing Marsh Warbler nearby; and a nice bowl of spicy soup in town. 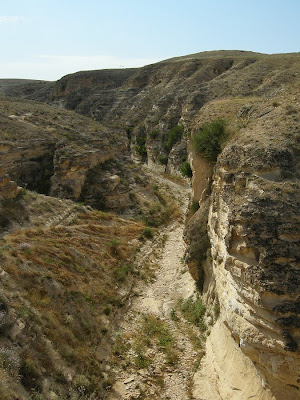 The 'See-see' wadi near Birecik. Which lived up to its name and produced possibly the sighting of the trip when we bumped into birding Jedi/mystic Arnoud van den Berg coming the other way.

For the original Turkey tales click here.
Posted at 23:55 No comments:
Email ThisBlogThis!Share to TwitterShare to FacebookShare to Pinterest

Can you count Goosanders?

Next Sunday (13th) all manner of people without anything better to do will be undertaking Gwent's first co-ordinated Goosander Winter Roost Survey. The method is very easy, shouldn't take more than an hour and a half and participation will be rewarded with a warm inner glow resulting from knowing one has contributed. So far, 17 sites will be surveyed during the evening but observers are still required for Carno Reservoir, Cwmtillery Reservoir, Shon Sheffrey’s Reservoir, Waun y Pound, etc.

If you, or anyone you know, might be interested in taking part please contact Richard Clarke via email by clicking here who will provide all the information you need; or, failing that, click here to email me and I'll pass your email address onto Richard. Failing that, leave a comment below including your email address.

OK, steady on, form an orderly queue.
Posted at 19:13 No comments:
Email ThisBlogThis!Share to TwitterShare to FacebookShare to Pinterest

Oooh, look down there

No, not here, down there. Yes, about six inches down the page, a back-dated post. Keeps everyone on their toes doesn't it.
Posted at 19:42 No comments:
Email ThisBlogThis!Share to TwitterShare to FacebookShare to Pinterest

A couple of hours on the falling tide at Goldcliff Point produced very little, a single Fulmar being the highlight; then to the pools to double-check a seabird hadn't snuck past to seek respite on the lagoons,... nope. Next stop Wentwood Reservoir for a Mandarin mit Mallard flyby and variety in the form of Wigeon, Gadwall and Pochard. Saving the best till last, parked at Cadira Beeches and pottered westwards towards the reported shrike. On arrival at the clearfell the rain was coming across in horizontal waves and, surprise surprise, the shrike wasn't showing. Did a circuit, started back round, rain stopped, up popped the shrike and my abysmal record of bagging shrikes in the county was finally put to rest. 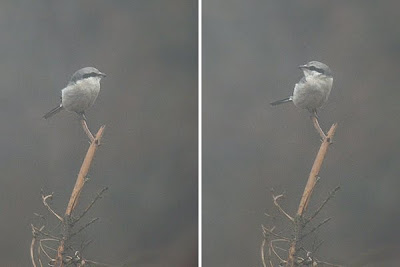