Bit blustery on the grasslands this morning. Apart from one Ruff, the Marsh Harrier and a reasonable flock of Snipe I saw naff all.
Posted at 21:21 No comments:
Email ThisBlogThis!Share to TwitterShare to FacebookShare to Pinterest

If you don't know what a Wilson's Phalarope looks like or, for that matter, can't remember the salient features of a Spotted Redshank, why not try reeling your necks in and not claiming one, two, or any number of them at Goldcliff for the time being. Why not pop along to the RaSPBerry tea-room and enjoy a coffee and cake whilst cooing at the pretty Mute Swans outside the window instead. It really will be much better for all concerned.


[NB. We would like to apologise to regular readers but the paragraph formerly occupying this space imploded under the sheer weight of vitriol and obscenities included therein. Normal service will be resumed as soon as possible. In the mean time,... Mr. Conway Twitty.]

Oh, there you are, a mug of Horlicks and enough horse sedatives to stop the the 4th and 13th Light Dragoons, the 17th Lancers and the 8th and 11th Hussars please.

Posted at 23:59 3 comments:
Email ThisBlogThis!Share to TwitterShare to FacebookShare to Pinterest 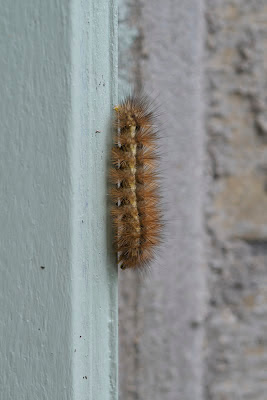 Buff Ermine at the front door, showing how badly evolved he is for playing 'knock down ginger'. Oh, he can knock alright but he just doesn't have the turn of pace to run away. Now sat in the corner of the flower bed (facing the wall) thinking about what he just did.

PS. Any dissenters regarding the identification, speak up or forever hold your peace/piece (depending on the type of person you are).
Posted at 12:40 No comments:
Email ThisBlogThis!Share to TwitterShare to FacebookShare to Pinterest

Spent most of the morning totting up common migrants passing overhead and searching through tit flocks for something more interesting. Well, apart from 15 Blackcap and 20+ Chiffchaff, the tit flocks remained resolutely titty. This wasn't a total washout, as a flock just north of the shelter belt at Uskmouth did include Coal Tit which is borderline scarce on the patch. 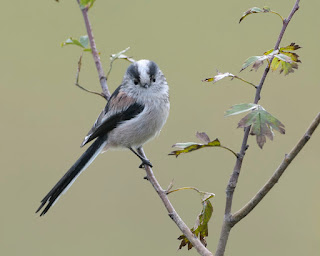 Overhead, Swallows out-numbered everything else by some margin and I ended up with a minimum of 800, all heading east, at various heights from 'way up there' to 'just missed ya'. The next most numerous was Meadow Pipit but they mostly consisted of two flocks quite content to flit about at the southern end of Saltmarsh/Farmfield Lanes with very few actually heading anywhere in a hurry.  The rest of the poor showing consisted of four Skylark, three alba wagtails, 17 Siskin and two (presumably Lesser) Redpoll.  Pret-ty slooow. 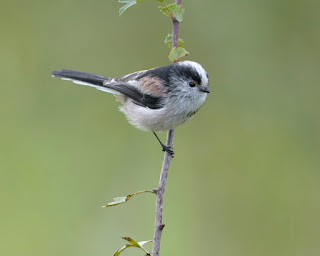 Of course, in contrast to my slooow morning, this afternoon, somebody (who has yet to step forward and accept the plaudits) had a very exciting afternoon when they 'found' two (!! [has there ever been a multiple occurrence?]) Wilson's Phalaropes (!!!) at Goldcliff Pools (!!!!). Luckily they popped the news on Birdguides, who put it out minus the customary 'a report of ...' (!), which was then picked up by RBA (customary 'a report of ...' reinstated), which resulted in me getting a phone call just as I was leaving the house for a bomb round the back on my bike.  However, not feeling the need to go and re-identify a couple of swimming Spotted Redshanks, I jumped aboard my off-road velocipede and carried on regardless. 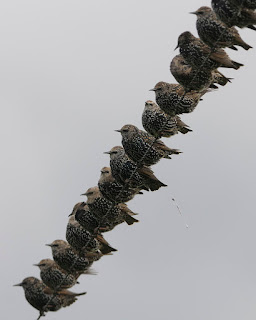 Wanted: a senior citizen to build an ark and round up two of every animal

Popped down to Goldcliff for high tide, hadn't realised the annual flooding of the lagoons had been carried out this week. The water levels are now right up to the gunwales and the bulk of those pesky passage waders have been successfully persuaded to move on,... phew! For a moment there it was looking suspiciously good for a proper rare.

Anyhoo, notable waterbirds that had survived the tsunami included two Wigeon and 14 Pintail all of which bobbed about with thousand yard stares on their spatulate schnozzed fizzogs. The few traumatized waders strewn around the periphery, dropped upon the upper reaches of the storm surge, included: 35 Ringed Plover, one Knot, 33 Dunlin, eight Snipe, 78 Black-tailed Godwit, four Spotted Redshank and five Greenshank.  The lone Knot, seemed to have taken it particularly hard; wearing camo gear and a bandana, it spent most of the time rocking back and fore, whilst every so often, in between long swigs on a bottle of cheap booze, it would angrily blurt out "I've seen some things man,... and some stuff!"

Visible migration had picked up a little with lots of Swallow and Meadow Pipit, and smaller numbers of Skylark, Sand Martin, House Martin, Yellow Wagtail, Grey Wagtail, Siskin and Redpoll. Stuff on the deck included a 1st-winter Redstart in the 'new' hedge leading to the sea wall, two Wheatear and a few Blackcap, Chiffchaff and Goldcrest. 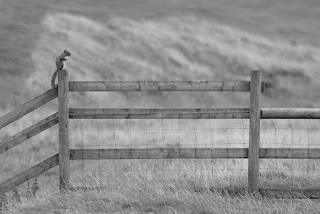 This Grey Squirrel was sitting atop the sea wall apparently contemplating the turbulent waters and Albion's happy shore beyond.
Posted at 23:55 No comments:
Email ThisBlogThis!Share to TwitterShare to FacebookShare to Pinterest 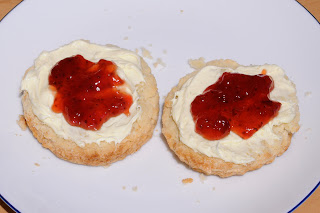 Currently caught in a terrifying scone vortex which goes something like this.

At some point the jam will run out and I'll spin off into a parallel living hell involving apricot conserve. 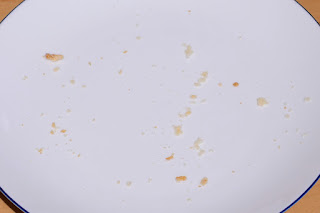 S'gone
Posted at 20:05 2 comments:
Email ThisBlogThis!Share to TwitterShare to FacebookShare to Pinterest

Drinking at the gilded puddles

An early tide at Goldcliff produced a very similar haul of waders to the last visit, namely: 30+ Ringed Plover, 175 Knot, 1 juvenile Curlew Sandpiper (although it appears I missed one), 360 Dunlin, 239 Black-tailed Godwit, 83 Curlew, 4 Spotted Redshank and 4 Greenshank.  There was, however, a notable increase in overhead passage, most of the gubbins was heading westward and included: 1 Skylark, 3 Tree Pipit, 70+ Meadow Pipit, 5 Yellow Wagtail, 5 Grey Wagtail, 10 Siskin, 1 Redpoll and 3 Goldfinch.  On the deck migrants included: 2 Stonechat, 1 Wheatear, 2 Sedge Warbler, 4 Reed Warbler plus Blackcap and Chiffchaffs.

On the way back, bumped into the Marsh Harrier at Boat Lane quartering above the massed ranks of, very nearly, 500 Canada Geese amongst which hid the usual shameful assemblage of escapes and hybrids.
Posted at 19:49 No comments:
Email ThisBlogThis!Share to TwitterShare to FacebookShare to Pinterest

Nearly but not quite

I had the high tide at Goldcliff Pools all to myself this evening, was hoping for something exciting, didn't quite happen. Even when the Grey Phalarope disappeared from St. Brides it didn't have the decency to come my way. A bit of cloud cover did make viewing conditions reasonable though and the waders that were present included: 3 Avocet, 62 Ringed Plover, 245 Knot, 2 juvenile Curlew Sandpiper, 245 Dunlin, 55 Black-tailed Godwit, 1 juvenile Bar-tailed Godwit, 3 Spotted Redshank and 5 Greenshank. And that was about it. The end.
Posted at 23:11 No comments:
Email ThisBlogThis!Share to TwitterShare to FacebookShare to Pinterest

Forgot to update for Sunday so...

Despite a bona fide yank knocking about, high tide at Goldcliff on Sunday wasn't that inspiring. The Buff-breasted Sandpiper was still present (was being the operative word, it hasn't been seen since); it pootled around the island for most of the time before becoming rather flighty as the tide retreated and took most of his little wader friends with it.  Other passage waders included: 27 Avocet on the foreshore, 240 Knot, 219 Black-tailed Godwit, four Spotted Redshank and seven Greenshank. The only passerines on the go were one Tree Pipit, 5+ Yellow Wagtail, one Whinchat and one Wheatear.

While I'm here,... some terrible but ever so slightly informative photos of the tagged Marsh Harrier. 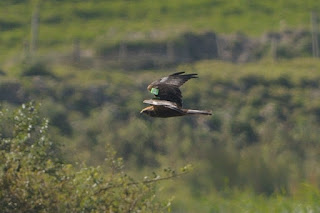 The elusive code, now to find out from whence it came.

During this bird's stay it has undergone the majority of its first 'complete' moult (which isn't complete but anyhoo...). The outer primaries are now whitish below (see the far wing), broadly tipped blackish and greyish above; the primary coverts are also similarly coloured; the moulted secondaries are darker than the new primaries but still obviously grey toned with a paler grey base and contrast with the adjacent, unmoulted juvenile feathers; some secondary coverts have also been replaced but are much closer in appearance to the juvenile coverts and don't catch the eye in the field...

... the new central tail feathers are grey with dark subterminal markings and the outer, still growing, feathers are a rusty brown. All in all, it has transformed itself from relatively difficult to sex juvenile into a fine example of a second calendar-year male,... whoop-di-bleedin'-doo.

PS. There is every possibility this bird will suspend the moult at this stage and retain this look (excepting the effects of abrasion/bleaching) until next summer. Let's hope he hangs around and finds a missus.
Posted at 22:48 No comments:
Email ThisBlogThis!Share to TwitterShare to FacebookShare to Pinterest

Just as I was on my way out the door, news of Buff-breasted Sandpiper at Goldcliff came crackling though the ether. A nifty little diversion and heavy mental suppression of the cynical 'it'll be a Ruff' voice in my head and,... ter-tick! Had to wait almost exactly 12 years to get this back. The Gwent list leaps forth. 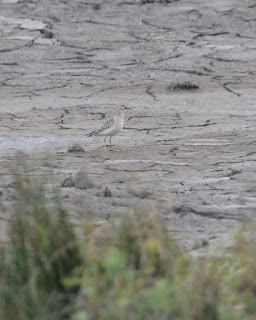 The smart little fellow briefly alighted on the hideward side of the lagoon, and stayed just long enough for a gawd awful photograph to be bagged. 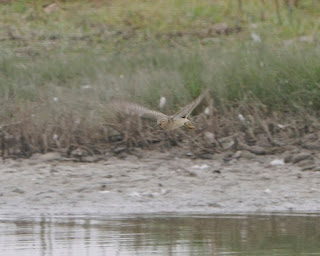 And an even less good flight shot.

Then it was back to Plan A, which mainly included counting brightly coloured flying things beyond Gwent's boundaries, beyond Wales' boundaries actually. 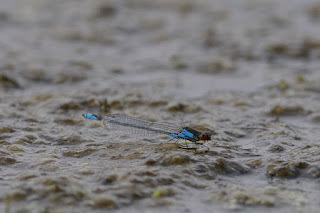 Flipping sun went in for all of ten minutes this afternoon, coinciding with the ten minutes I was pointing my camera at this fella.  Kind of takes the glint from his eye,... the very reddish glint.
Posted at 20:08 5 comments:
Email ThisBlogThis!Share to TwitterShare to FacebookShare to Pinterest

Height of the tide

The tides at the moment are woeful,... and dropping.  Apart from decent numbers of Knot and Black-tailed Godwit there was little else to shout about at Goldcliff. Greenshank and Turnstone were around but in, seemingly, reduced numbers and I managed to miss the one Spotted Redshank as it did a disappearing trick on the back lagoon. Passerine migrants had slowed too, just a single Wheatear on the sea wall and a few Yellow Wagtails amongst the cows. Did manage to bag the code on the Marsh Harrier's tags though, so stay tuned for an update. This bird is most of the way through it's first full moult now, nice and easy to age and sex - 2nd year male.

Oh yeah, Barney and Rinky-dink are still around, which is nice for all the feral goose fanatics out there.

Posted at 23:10 No comments:
Email ThisBlogThis!Share to TwitterShare to FacebookShare to Pinterest

A different, rather than better, mix of migrant passerines included Yellow Wagtail 6, Whinchat 1, Reed Warbler 1 and Lesser Whitethroat 1. And the numbers of Stock Dove feeding amongst the plastic bales had increased slightly to at least 29. 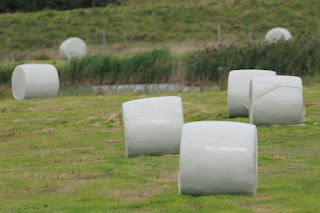