Post-Cetti's visits to Goldcliff produced the usual passage waders and passerines with maximum counts of 106 Ringed Plover, one Common Sandpiper, 13 Black-tailed Godwit, two Greenshank, one Spotted Redshank, 650 Dunlin, seven Whimbrel, three Swift, three White Wagtail, three Wheatear and one Whinchat.  The Glossy Ibis also put in appearances, in flight over the grasslands on Thursday, then at Goldcliff on the Friday before getting up and disappearing eastwards.  It later appeared at Slimbridge before heading south.  It was however, roundly trumped by an Egyptian Goose which flew around over the pill and grasslands with the Shelduck flock,... monster patch plastic! 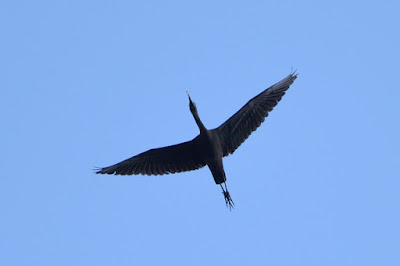 The Glossy Ibis leaving eastwards, the final act of its 60 day stay having originally been found at Uskmouth on 29th February.

Posted at 19:11 No comments:
Email ThisBlogThis!Share to TwitterShare to FacebookShare to Pinterest

Saw a Broad-billed Sandpiper at Goldcliff.  Just 69,764 hours since I saw the last one in almost exactly the same spot (more of which here).  What fun.  Of course, it would have been funner had I managed to get down the patch and find it myself but getting news of Mr. Powell's discovery via Mr. Jones whilst half a mile from home and attached to a labradoodle did produce some level of entertainment.  Having coaxed said dog to jog home, shuffled cars on the driveway and performed a hasty swerve or two through Friday night traffic I arrived at the hide to find two well-known members of South Wales' ornithological glitterati peering out at a jumpy Dunlin flock.  Unfortunately, the sandpiper had snuck from view.  It remained undetected for a good wee while before suddenly appearing on the island and performing admirably to all and sundry until tucking its stripey little head under its wing and going to sleep just before dark.

An early front runner for bird of the spring; bloody early actually as, according to Birdguides, this was the earliest arriving Broad-billed Sandpiper since before bread came sliced.  And it hung around on the Saturday too,... everybody's happy!
Posted at 22:54 No comments:
Email ThisBlogThis!Share to TwitterShare to FacebookShare to Pinterest

Did the high tide at Goldcliff.  Nothing outrageous but the Glossy Ibis reappeared, heard a Yellow Wag, had at least five (probably seven) White Wag, a Lesser Whitethroat was rattling away behind the second (formerly third) viewing platform and three Wheatear graced the bund/sea-wall.  Amongst the waders, nine Knot plus single Spotted Redshank and Greenshank were about the best.  A quick scan of the grasslands near Boat Lane produced 200+ Sand Martin plus a few Swallow. 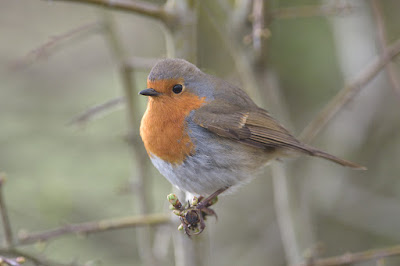 My (belonging to or associated with me) weekend

A couple of early mornings 'on the Cetti's' at Uskmouth followed with a potter down Saltmarsh Lane on Friday and THE MEGA TIDE at Goldcliff on Saturday.

Spring continued its faltering stagger into the county.  Sand Martin and Swallow trickled overhead and three Sedge Warbler, seven Blackcap and about a dozen Willow Warbler dotted the shelter belts, scrub and hedgerows.  Chiffchaff were present in decent numbers though, about 45, but no Redstart, Gropper, Whitethroat,...

A couple of Snipe had been pushed into the reedbeds at Uskmouth by THE MEGA TIDE.  Whilst at Goldcliff THE MEGA TIDE produced a not particularly mega haul including: one Barwit (amongst about 100 Blackwit), three Greenshank, Spotshank, female Merlin and a male White Wagtail.  The dearth of small waders continues. 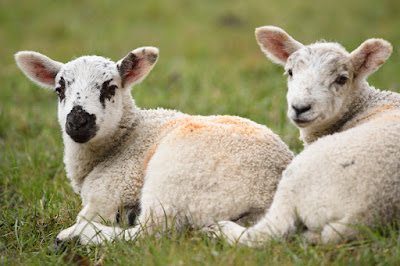 So spring has arrived then,... uh-huh.

PS.  Oops, nearly forgot, the Glossy Ibis put in an appearance at Goldcliff on Saturday too.  This bird has now visited nearly every corner of the patch.  Originally found and identified at Uskmouth in late February (when last seen flying southeast in the direction of the grasslands), it was then relocated near Redhouse Barn/Boat Lane in early March and has now finally made it to Goldcliff.  Joy.

Posted at 20:00 No comments:
Email ThisBlogThis!Share to TwitterShare to FacebookShare to Pinterest

As I didn't really get out birding today here's a random California-back-in-the-day image,... 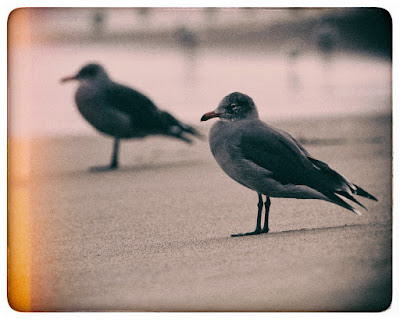 A dream within a dream.  If Carlsberg did gulls,.. and beaches,... Heerman's Gull, Limantour Beach, Point Reyes, California.
Posted at 19:51 No comments:
Email ThisBlogThis!Share to TwitterShare to FacebookShare to Pinterest

A few hours at Goldcliff over the afternoon high tide produced three Golden Plover, one or two Spotted Redshank, three Greenshank and 47 Black-tailed Godwit.  Very little in the way of small waders though with only one Dunlin and three Ringed Plover.  The best passerine migrants were 15 Sand Martin, one Wheatear and a dose of Chiffchaff.  However, trumping all the birds were two or three Harbour Porpoise feeding close-in off the point.

Dropped in at Boat Lane/Redhouse Barn on the way back.  The Glossy Ibis continues to potter around and a Willow Warbler plus more Sand Martins and Chiffchaffs added to the haul of incoming migrants.
Posted at 23:55 No comments:
Email ThisBlogThis!Share to TwitterShare to FacebookShare to Pinterest
Newer Posts Older Posts Home
Subscribe to: Posts (Atom)