Over the weekend I was sent a photograph of the 'Scaup' at Parc Bryn Bach and noticed a few images popping up on social media.  I had my suspicians but wanted to take a look before stating anything too categorical.  Saw it on Tuesday, took a few pics,... and,... well,... I'm pretty sure this is our much-loved, regularly returning, Aythya hybrid (Pochard x ???).  I might be wrong, it may moult in lots of lovely vermiculated mantle, scaps and flank feathers in the coming weeks and I'll have Scaup egg all over my face, but I fear it will hang around all winter looking more-or-less as it does now.  If I'm correct, and if all our Scaup-like hybrids relate to the same long-lived bird, whilst appearing superficially like a juvenile, this bird is actually about 15 years old! 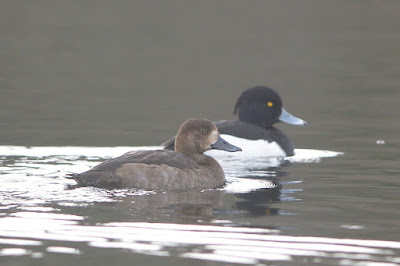 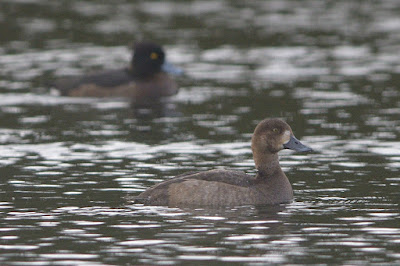 Head shape not quite right, the forehead isn’t quite as rounded/bulbous as it might be (it isn’t the ‘high point’ of the head) and that little ‘peak’ behind the eye (producing a flattish crown) is not just due to it having been feeding or being alert. 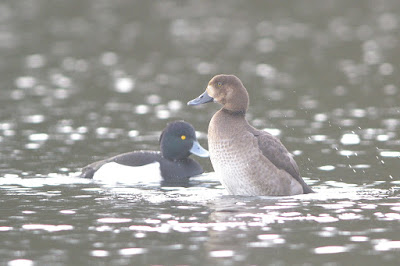 Slightly over-exposed in this image but it does show the lovely patterning on the belly. 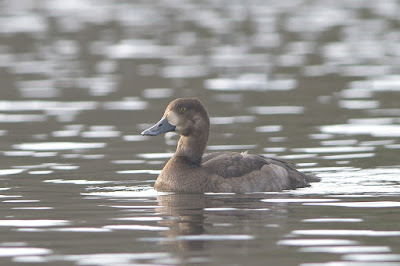 The amount of pure white in the blaze is very restricted (it's mostly sullied brownish), also the blaze doesn’t meet over the bill and is diffusely edged. 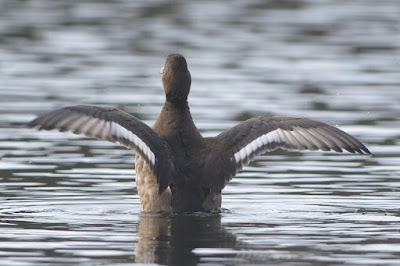 Do those greater coverts look adult shaped to you?  They look adult-shaped to me.  Also, would most Scaup show more white on the outer webs of those inner primaries? 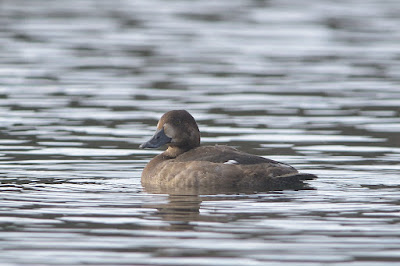 One or two feathers on the left flank do show very fine vermiculation.  They are not easy to see. 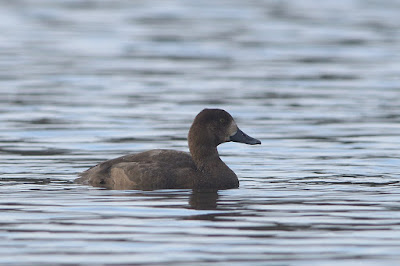 A few upper scaps and mantle feathers have been replaced, they appear blackish-brown amidst the older, dark brown feathers but don’t show any significant amount of vermiculation; I’d imagine the new feathers will, over time, fade/abrade to match the older feathers (i.e. the bird will remain essentially plain brown on the mantle and scapulars). 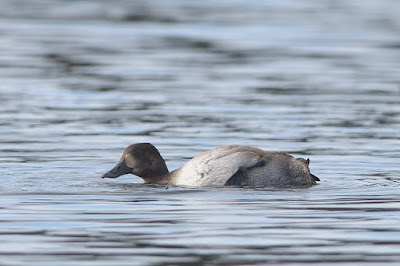 Blaze doesn't meet above the bill. 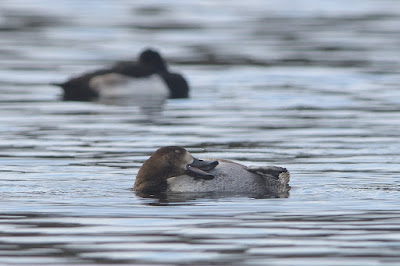 Always seems to exude strong Pochard vibes to my eye. 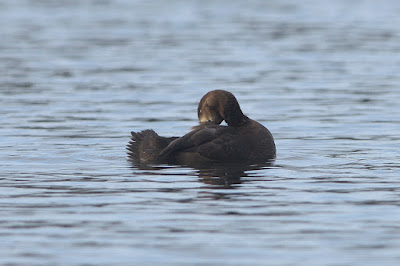 One adult-shaped central feather with the rest abraded, it’s very difficult to be sure but I can’t see bare shafts protruding from the abraded tips as might be expected with a juvenile. 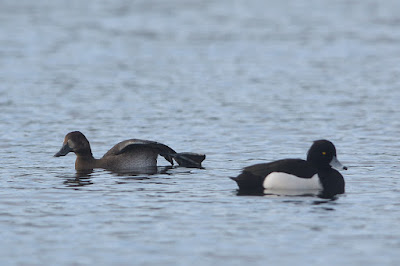 It isn't actually that much bigger and bulkier than the accompanying Tufted Ducks.  Would a Scaup look slightly broader in the beam?  I do wonder whether it couldn't be a Pochard x Tufted Duck and the whole Scaup thing be a complete facade. 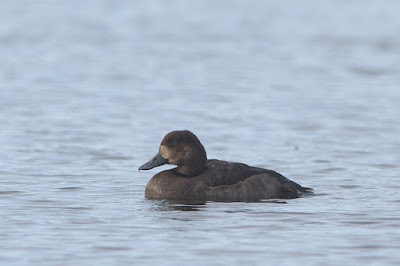 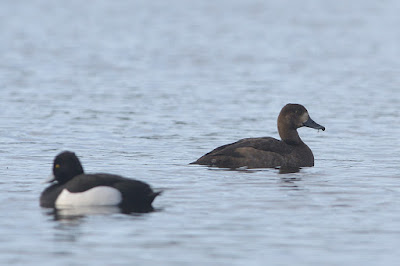 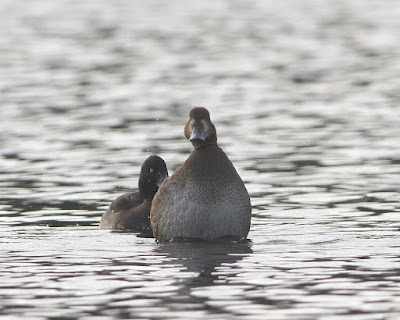 The lower breast grades into greyish-white belly feathers (they look overly dark here due to slight under-exposure), finely patterned with dark feather centres and shaft streaks.  Would a juvenile/first-winter Scaup show a clearer boundary between a dark breast and a cleaner whiter belly?

I don't think, in isolation, any of the above features rule out juvenile Scaup (they can show a dull eye, lack vermiculation, have a 'funny' blaze and dull primaries) but in combination they make me as suspicious as Mr. McSuspicious from Suspiciousville in deepest Suspiciousland.

If anyone takes the time to pop up and see this duck in perfect (bright but overcast) light and gets a definitive set of close-up pictures (including flight/wing stretch shots) please drop me a line.  If this is the bird I think it is she really deserves an article in the bird report.

Finally, there are old posts on similar hybrids here, here, here, here and here.  I also have images from more recent (non-blogging) winters.  Whether the differences in appearance are down to the bird maturing, stage of moult, camera equipment, etc., or due to more than one bird being involved I just don't know.  What is the more parsimonious explanation, one regularly returning bird slightly varying in appearance, Gwent being super lucky and being a mecca for Scaup-like hybrids or a combination of both?

PS. I've remembered why I don't blog anymore, I just don't have the time for this malarky.

Posted at 11:27 No comments:
Email ThisBlogThis!Share to TwitterShare to FacebookShare to Pinterest

Gawd knows how many tit flocks I have sorted through this autumn, haven't found so much as a Firecrest, let alone a Yellow-browed, Pallas' or Dusky Warbler.  An entire autumn birding in Gwent, predictably, almost reassuringly,... shite. 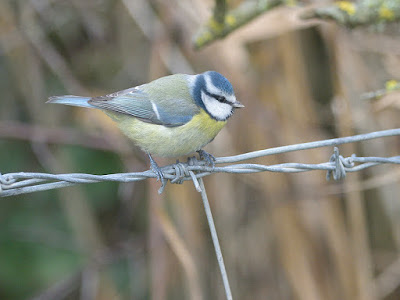 Posted at 14:12 No comments:
Email ThisBlogThis!Share to TwitterShare to FacebookShare to Pinterest 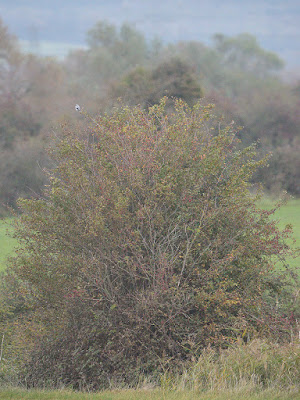 Park up at Redwick in the dark and yomp to Coldharbour Pill.  Just before dawn the Great Grey Shrike appears from its roost, shows atop various Hawthorn and Blackthorn before slowly making its way inland up the reenside scrub.  Plenty of common stuff on the move to keep one entertained for the next hour or two but the shrike had gone and gone.

Posted at 15:39 No comments:
Email ThisBlogThis!Share to TwitterShare to FacebookShare to Pinterest

Some people saw the peanut before I did.  Some people didn't have the first inkling of an idea that it might be an interesting peanut.  One person thought it was a different semi-interesting peanut and had to leave before it reappeared.  Luckily, I am very good at peanut identification and came along at precisely the right time. 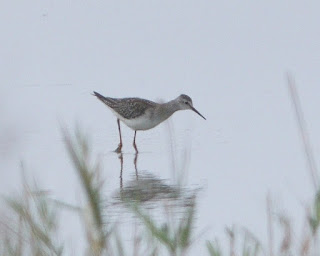 'PSEEP!' A single, shrill siren call rang around the lower basin. And there, on the exposed mud shone the dazzling supercilium and belly on a chunky monkey of a pipit that had no earthly business in a muddy hole just north of Newport. A bona fide Ynysyfro mega. 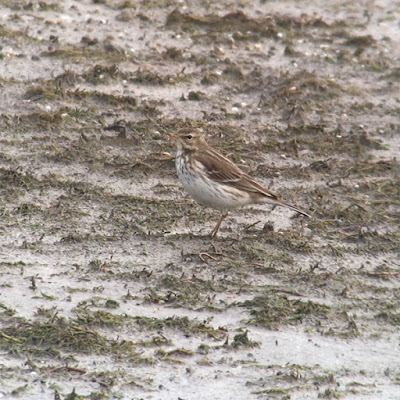 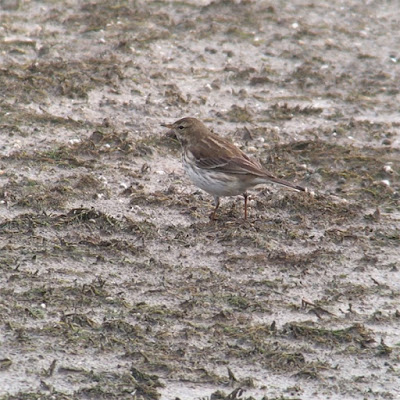 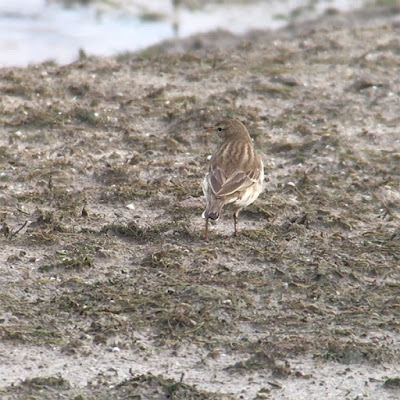 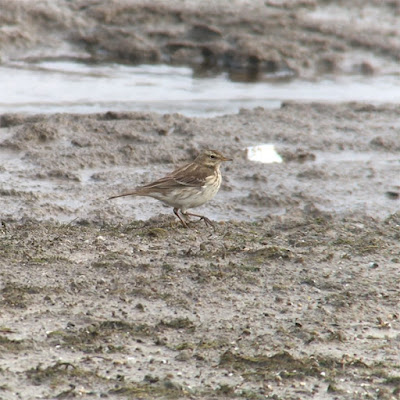 The .MOV engine in the iPhone has done all kinds of weird shizzle to the contrast and sharpening, and these are quick and dirty screenshots, but it is quite a well-marked bird, check out those mantle stripes.
Posted at 22:54 No comments:
Email ThisBlogThis!Share to TwitterShare to FacebookShare to Pinterest 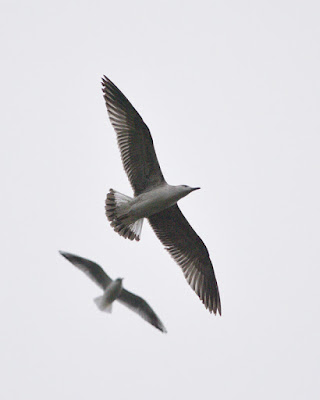 So far, my only 'in-the-flesh' view of the Caspian Gull in Bettws. Arrived just in time to see all the gulls take to the air and drift off. I thought the underwing looked too dark (not helped by overhead conditions [rain, dull as dishwater] and under-exposure) and the tail a bit too michahellis-like but LGs, much better, photographs of the bird on the deck appear to show a Gibbins, et al. (2010; 2011) proof Caspian. Phew! Finally, a glaring hole on the Gwent list plugged. Well played SP.
Posted at 17:53 No comments:
Email ThisBlogThis!Share to TwitterShare to FacebookShare to Pinterest

It just keeps on coming back 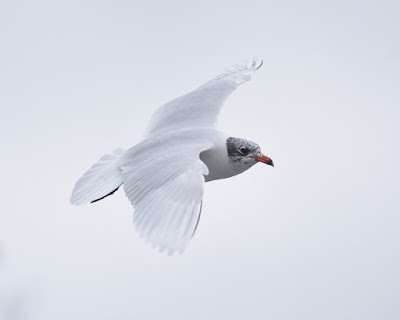 I gave a letter to the postman, he put it in his sack 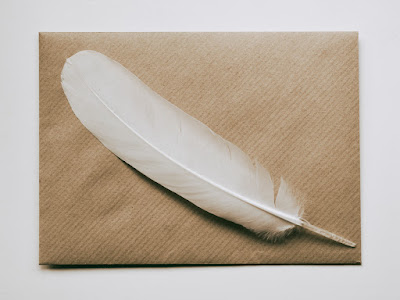 Modern rarity hunting is a funny old game. Find dead bird, pluck feathers from dead bird, put feathers in envelope, post envelope to clever bunnies, cross fingers. I wonder how many, if any, Ardea alba egretta records in the Western Palearctic have been confirmed by DNA or biometrics? Fingers still crossed.
Posted at 22:51 No comments:
Email ThisBlogThis!Share to TwitterShare to FacebookShare to Pinterest

Saw a Pallid Swift on the patch today,... which was nice.

[Note to self: blog about it when you get a mo.]
Posted at 22:49 No comments:
Email ThisBlogThis!Share to TwitterShare to FacebookShare to Pinterest

Didn't expect this to still be hanging around on my return from the Azores. Nice little Gwent/patch tick c/o M&JP. 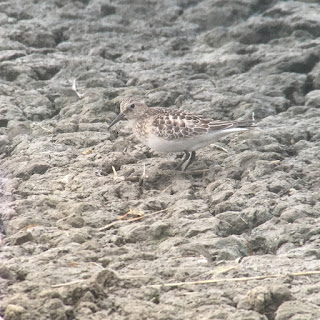 Posted at 23:21 No comments:
Email ThisBlogThis!Share to TwitterShare to FacebookShare to Pinterest
Older Posts Home
Subscribe to: Posts (Atom)