Turns out the Water Vole(s) was/were, and I quote: "... the first confirmed sighting [on the reserve]..."

One's mammal patch list leaps to about 24 (if we include Feral cat, Pipistrelle sp. and a dead dolphin sp.).  I should probably invest in a bat box and mop up a few wingèd insect munchers, beyond that maybe a wandering Wild boar? Or a Killer Whale off the point?
Posted at 22:00 No comments:
Email ThisBlogThis!Share to TwitterShare to FacebookShare to Pinterest 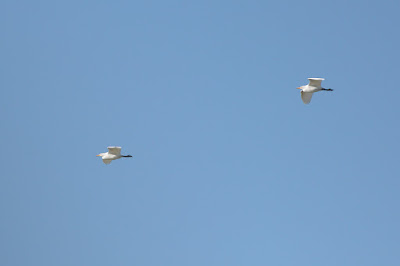 An early morning, Cattle Egret related, text from TC meant a slightly rushed cuppa and Shredded Wheat and a quick dash patchwards.  Unfortunately, as I whizzed down, the Cattle Egrets flopped over to Boat Lane and, from there, were watched to head off north-eastwards ("high,... lost in the distance,... doubt they'll come back,... no chance of locating them,...").  Bugger.

Headed off down Saltmarsh Lane.  Found a Water Vole (probably two), mammal patch tick!  I'd always put the odd report from the reserve down to a combination of rats, inexperience and string.  But there one was, felling a reed, swimming across a reen and then spending 20 minutes devouring the aforementioned reed.  I'll have to double-check there isn't a covert reintroduction scheme occurring; alternatively, I have either been walking straight past them for over a decade or they have colonised from gawd knows where.  Interesting,... in a soggy little rodenty way.

Anyhoo,... news floated across the ether that the egrets had returned to Goldcliff.  Tore myself away from ratty and headed back to Redhouse and the car, collecting a Nuthatch on the way (dwip-dwip-dwip). 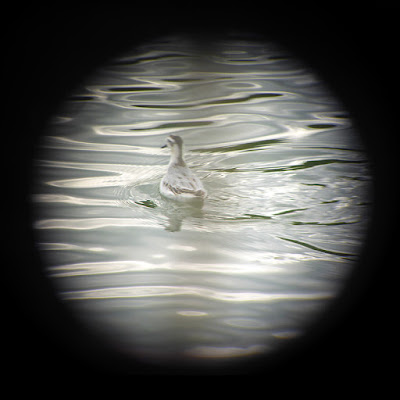 Grey Phalarope at Ynysyfro,... down a toilet roll,... through a fence.

Stopped off at Ynysyfro hoping for a Black Tern,... found a Grey Phal.  It dibbled about at doughnut distance, about as close as it could be, still found a way to take a truly awful photo though.  Should you wish to emulate the above masterpiece you will need: a naff camera (ideally with a mushy jpeg engine that is more than a touch over-zealous on the noise reduction side of things); a toilet roll; a fence; the patience of a saint; one red sock; one blue sock; and,...Years. Of. Practice.

It turns out this is the third Grey Phal to grace the reservoirs.  Gutted it wasn't an Ynysyfro first.
Posted at 23:57 1 comment:
Email ThisBlogThis!Share to TwitterShare to FacebookShare to Pinterest
Newer Posts Older Posts Home
Subscribe to: Posts (Atom)