The sea gives and the sea takes away,... but mainly gives

A couple of hours on the point, with the tail end of Doris and this afternoon's rising tide, produced a couple of Gannet and handful of Kittiwake (with another 15-20 probable Kittidots on the far side). Not the hoped for aukfest but better than useless.

Yesterday's incoming tide also produced. The female Scaup, reported on and off at Peterstone recently, flew in to the mouth of the gout for a wash and brush up in the rain. Well worth a slither about in the mud and horse shit.
Posted at 23:00 No comments:
Email ThisBlogThis!Share to TwitterShare to FacebookShare to Pinterest

Popped to Peterstone Gout for high tide and the reported Scaup. Saw an f. distant dot that was probably the Scaup, convinced myself for a while before the birding conscience kicked in. The fact it didn't even cross the threshold for a Gwent year-tick should give you an idea of just how shit a view it was. Did have a Common Scoter drift slowly down-channel on the falling tide though (also distantly, perhaps v. distant as opposed to f. distant) so,... swings and roundabouts. 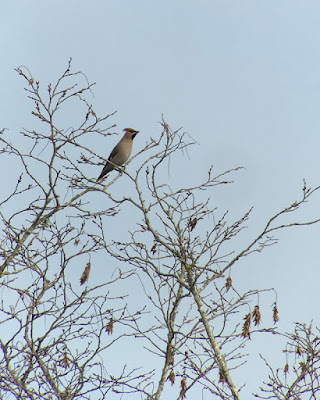 Found a dozen of these guys on the way home. Fly-catching from roadside trees, not a berry in sight.
Posted at 23:54 No comments:
Email ThisBlogThis!Share to TwitterShare to FacebookShare to Pinterest 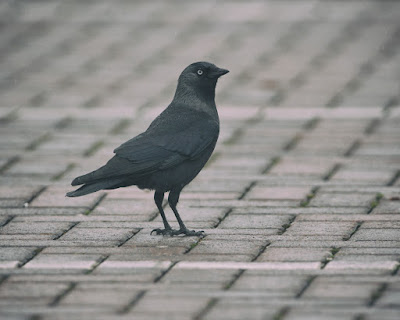 A Jackdaw outside Tescos giving a withering look to someone who mistook the 'mother and baby parking' for the 'fugly and lazy parking'.  Jackdaws,... famously judgemental.  And, boy, do they hold a grudge.  Memories like elephants,... tiny, evil, flying elephants.
Posted at 23:17 No comments:
Email ThisBlogThis!Share to TwitterShare to FacebookShare to Pinterest

Withering before the blast

A finger-numbing morning in an easterly on the eastern levels.  Checked out the Lapwing flock on Caldicot Moor, nearly 600 birds but not a single Golden Plover (or anything more interesting) among them; did bump into a couple of Red-legged Partridge though.  Decided on more wader fun in the form of a Jack Snipe foray.  A quick potter on the saltmarsh between Collister Pill and West Pill produced three Jack Snipe and 30 Snipe.  The dense cord-grass along this stretch doesn't make for crippling views on the deck but got decent enough looks of all three of the stripey ickle sweeties in flight.
Posted at 23:09 No comments:
Email ThisBlogThis!Share to TwitterShare to FacebookShare to Pinterest

Finally caught up with the bluetail, only took the five visits.  Not easy to dig out but, once it appeared, it showed down to about five yards, albeit briefly, just beyond the point where the stream goes through the plastic pipes and under the path.  Luckily, it popped up in a reasonably sunny spot so half-decent views were had by one and all (well, all two and a half of us).
Posted at 23:11 No comments:
Email ThisBlogThis!Share to TwitterShare to FacebookShare to Pinterest
Newer Posts Older Posts Home
Subscribe to: Posts (Atom)