A reasonable high tide roost at Goldcliff produced a Golden Plover which dropped onto the island on the first lagoon and hung around awhile before being booted by a semi-amphibious cow, 1-2 juv Little Stint, 1 Common Sandpiper, 2 Turnstone, 1 Spotted Redshank, 8 Greenshank, 103 Knot, 164 Black-tailed Godwit, 183 Ringed Plover (one of which was taken by a Sparrowhawk), 273 Dunlin, 19 Snipe and 65 Curlew.

The best of the wildfowl were a redhead Goosander which flew in from the east and dropped in on the back lagoon, 3 Wigeon and the Chinese Goose.  Passerine migrants included 1 Grey Wagtail and 4 Tree Pipit over W, plus 1 Wheatear and 32 Yellow Wagtail dotting about on the deck.

The only other notables were 1 Kingfisher and 22 Stock Dove.
Posted at 23:26 No comments:
Email ThisBlogThis!Share to TwitterShare to FacebookShare to Pinterest

Two things I forgot to mention

Thing 1: whilst at Goldcliff t'other day, I noticed one of the Ringed Plovers was colour-ringed/flagged, according to this wonderful resource, it would appear to come from the Giske wader ringing station, at the Makkevika bird reserve, Møre & Romsdal county, Norway. So, not so much a Ringed Plover as a Sandlo, and possibly a tundrae Sandlo at that.

Thing 2: also on Saturday, my mum and sister number one found a bleedin' Wryneck dibbling about on the patio/lawn of the holiday cottage they were staying in down in Dorset. I got to identify it over the phone, but still,... GRIPPED.
Posted at 11:02 1 comment:
Email ThisBlogThis!Share to TwitterShare to FacebookShare to Pinterest

Arrived at Goldcliff to be met with the lovely sight of a large blue tractor whizzing around cutting the fields around the pools. Luckily, the waders on the first lagoon weren't too perturbed and, beyond flushing a few Snipe every now and again, Farmer Giles didn't fuck things up quite as much as I thought he might.

Amongst the waders were: 3 juvenile Knot, 1 Spotted Redshank, 6-7 Greenshank, 20 Black-tailed Godwit, 13 Snipe and 93 Ringed Plover (including one colour-ringed/flagged individual), however, the highlight was provided by a juvenile Little Stint which appeared overhead before dropping in and pottering up and down the near edge of the island. Also dotted about were about 10 Yellow Wagtail, 1 Pintail and 1 Swift,... oh, and the Chinese Goose.

However, the most exciting occurrences were the two torrential downpours which whipped though, the first just monsoonic rain, the second rain, hail and some impressive electrical activity,... it left a right old pong of ozone hanging in the air. The last time I had lightening baked O3 wafting around the nostrils, I was hiding under a rock on a Turkish hillside thinking Grey-headed Bunting was to be my last tick. Happy days.

A flavour of the second opening of the heavens can be sampled here, unfortunately, the really close clap of thunder and crack of lightening happened just after I stopped recording.
Posted at 17:02 No comments:
Email ThisBlogThis!Share to TwitterShare to FacebookShare to Pinterest

Actually went birding the other day. Almost enough of interest to make it worthwhile.

PS. Has anyone bagged the code on the Marsh Harrier's wing-tags yet?
Posted at 20:29 No comments:
Email ThisBlogThis!Share to TwitterShare to FacebookShare to Pinterest

A weekend in Weymouth without a sniff of Portland, Lodmoor or Radipole. 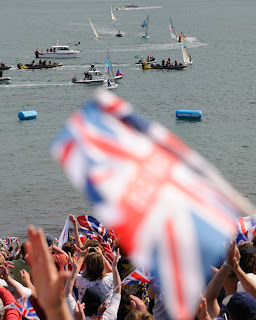 The most decorated sailor in Olympics history. Ben Ainslie celebrating his fourth gold following a nervy tussle with Jonas Hogh-Christensen and Pieter-Jan Postma.  Jonathan Lobert won the final race and grabbed overall bronze as Postma's challenge imploded on the last upwind leg.  Hogh-Christensen had been Ainslie's primary concern but it was Postma who almost snatched gold until he collided with Dan Slater, was forced to take a penalty turn, and slid from potential gold to overall fourth.

The Star fleet and an unfeasibly large Union Jack. At this point Iain Percy and Andrew Simpson were keeping pace with Fredrik Loof and Max Salminen whilst their nearest rivals, Robert Scheidt and Bruno Prada, were some way back. Unfortunately, the GB pair lost out at the death as Loof and Salminen took first, and a light, shifty wind did for the GB boat in the last few metres. 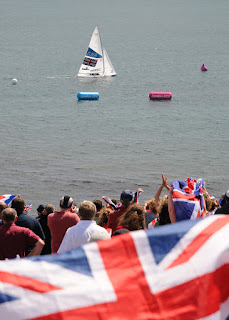 Silver medalists Percy and Simpson, taking the applause of the adoring hordes on the Nothe.  In non-sailing news, during the race two Mediterranean Gulls (one adult, one second-summer) headed west towards Ferrybridge.

The women's 470 fleet. Cardiff-born Hannah Mills and partner Saskia Clark are just out of shot.  They finished sixth in this, the sixth, race but lead the overall standings.

PS. Click on the images for larger versions,... if you wanna.