And so began my latest trip to the Azores.  However, once the stop-starty start had been overcome it was a high-octane, fun-filled, knockabout adventure amidst the beautiful landscapes of Terceira and São Miguel. 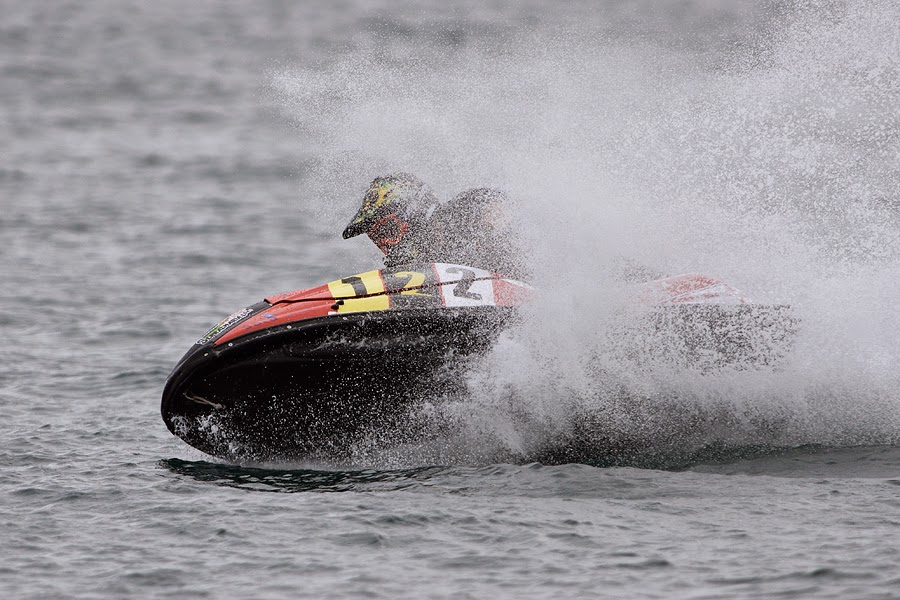 High-octane gulling, I assume he was gulling as he was tazzing around within metres of the pontoons in Ponta Delgada harbour.  He probably got some cracking views of Glaucous and Ring-billed Gull. 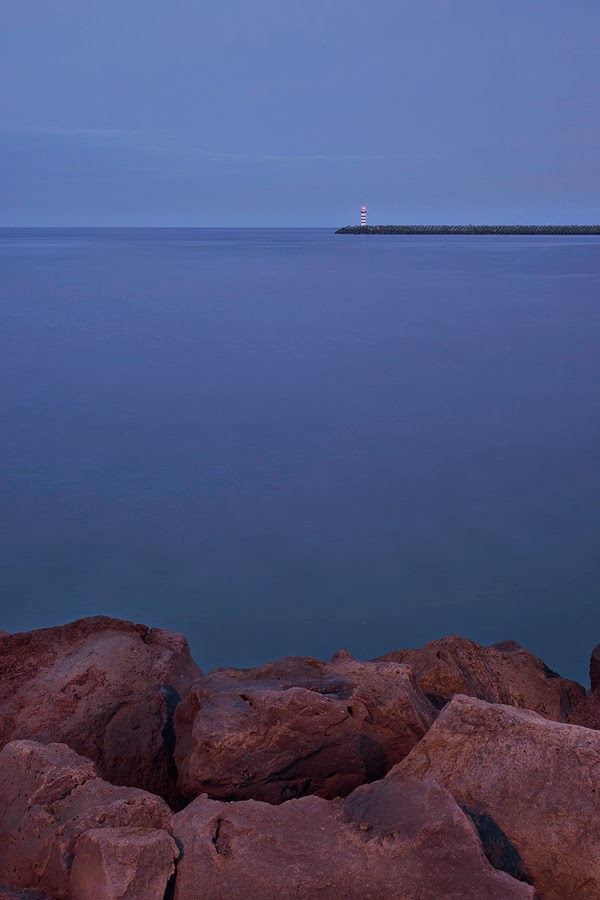 The port at Praia da Vitória,... in the dark; moments earlier two Bonaparte's Gull, two Mediterranean Gull and 15 Ring-billed Gull had tucked their bills under their wings and settled down to sleep for the night.

On Terceira, days were largely spent touring such fragrant delights as the tip, the fishing port and the oil refinery quarry in search of a mythical hyphenated larid (think Glaucous-winged, Slaty-backed, Black-tailed,...).  In between times we took time to stare in wonder and awe at 'Azores Gull' (for which read, 'obtain yet more photos and some very poor sound recordings'). 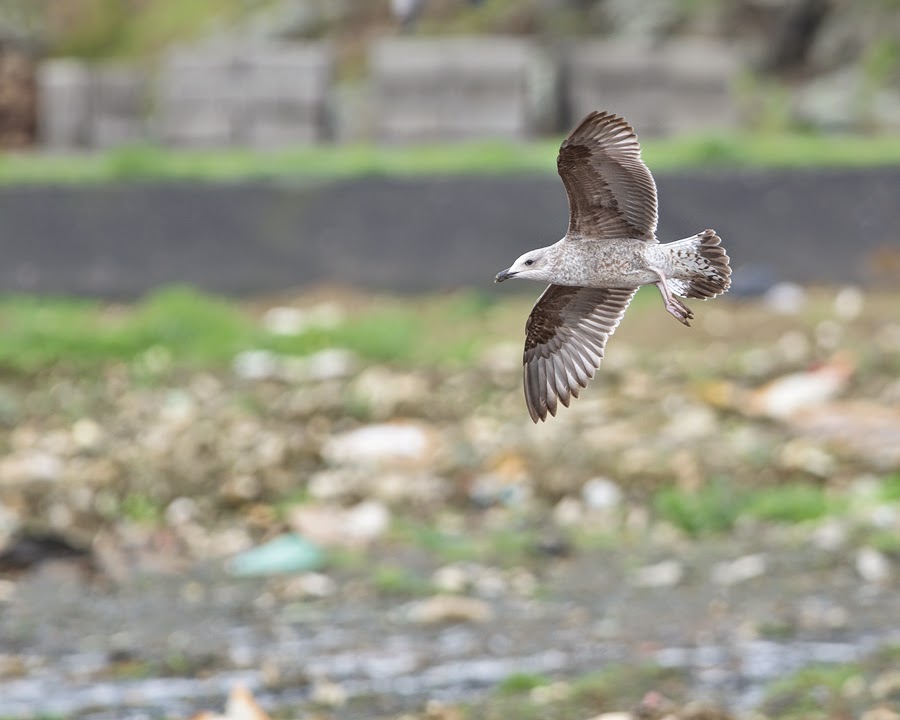 Gull.  Tip.  Gull tip tip: speak to the manager of the tip and gain a VIP pass and a front row seat at the tipping face,... get in! 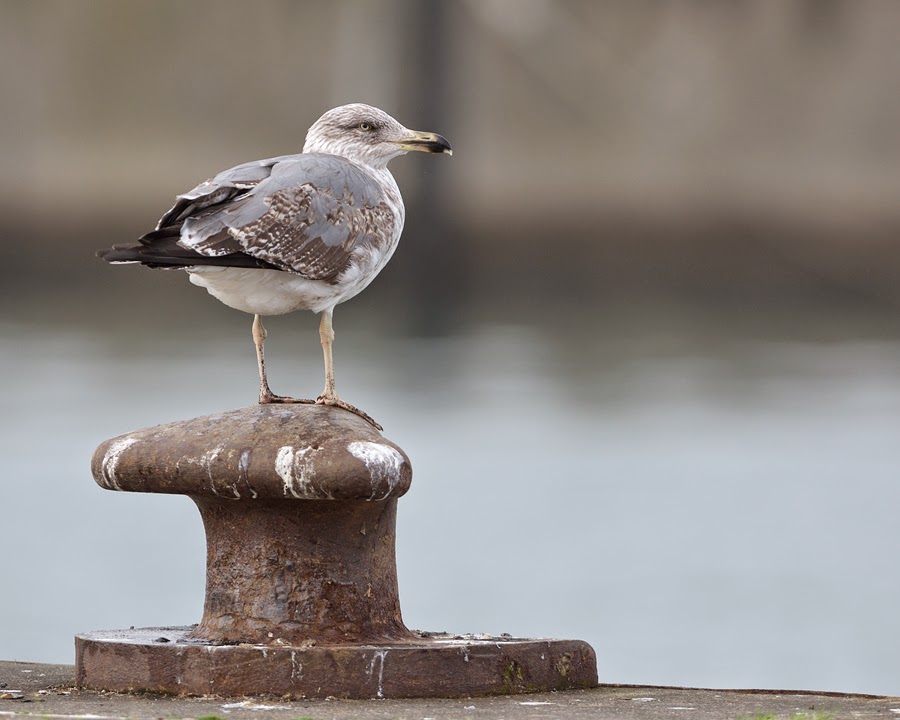 Second-winter 'Azores Gull' on a bollard.  [Dear reader, as per any reference to large white-headed gulls, please remember to add the suffix '-type' in your head after the assumed age class as, a. I can't be bothered to type it every five seconds, and b. neither you, me or anyone else can be 100% sure of this little bleeder's age.  Some of them do weird shit and we shouldn't let them get away with it.] 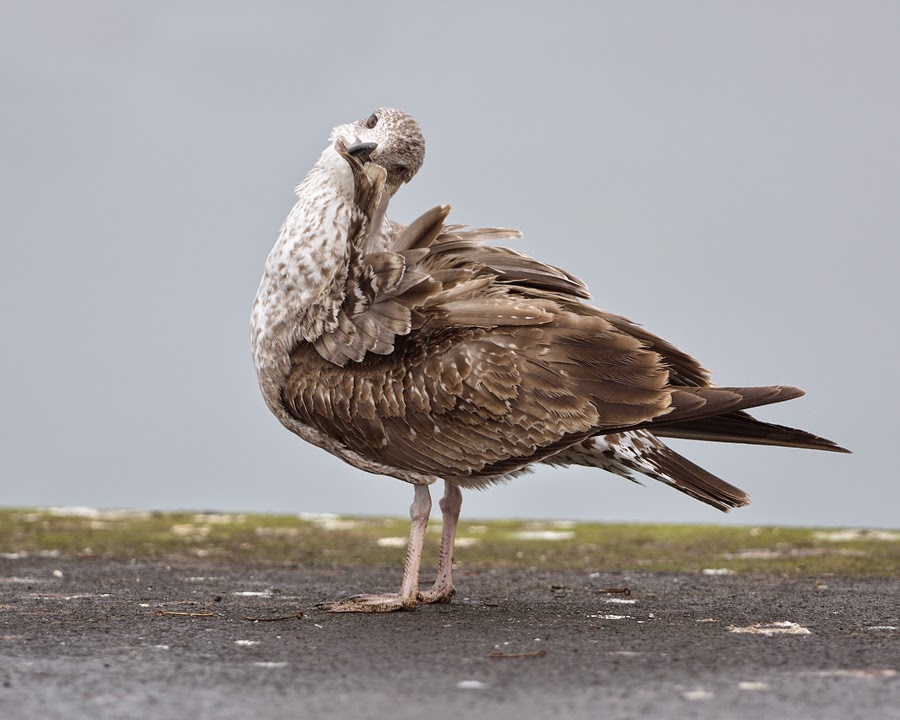 First-winter 'Azores Gull', this one looks a bit fluffy because it is preening in readiness for going out on the town, they don't all look this fluffy. 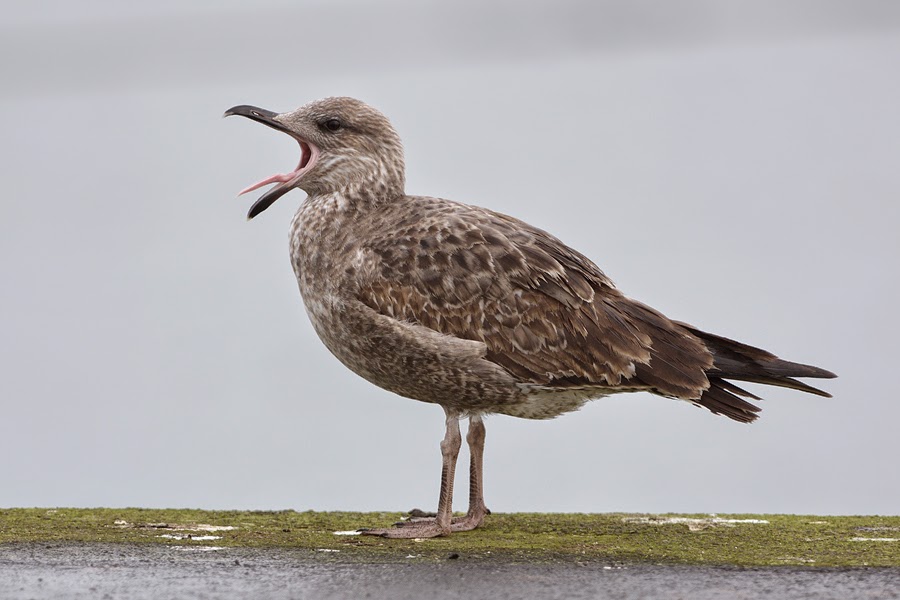 First-winter 'Azores Gull', the main confusion species here is Laughing Gull, just because a gull is laughing does not mean it's a Laughing Gull.  This one is actually laughing because it had seen a hilarious discussion about a stringy 'Azores Gull' on Facebook. 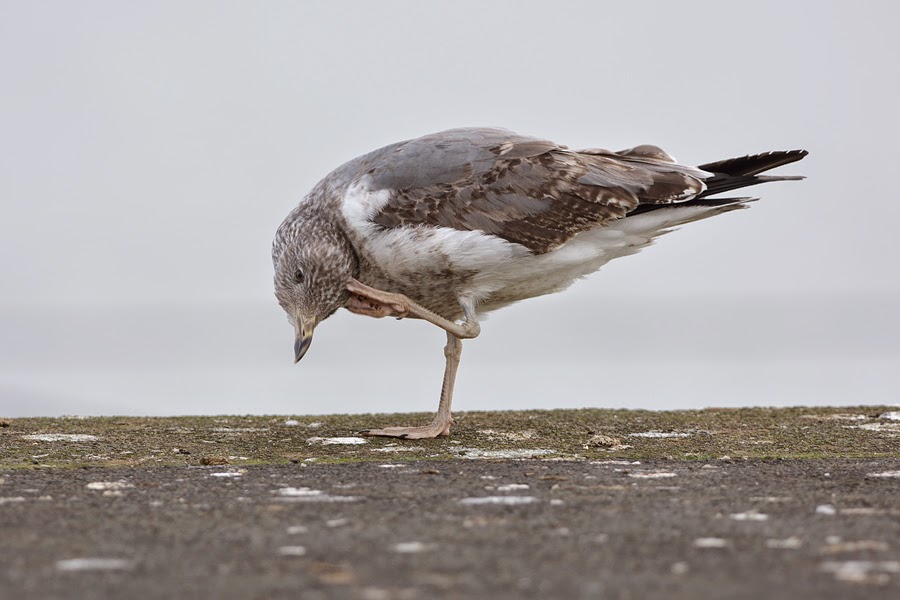 Second-winter 'Azores Gull'.  There is always a modicum of head-scratching when gull watching, this one is pondering the much overlooked conundrums that Lesser Black-backed Gull can cause. 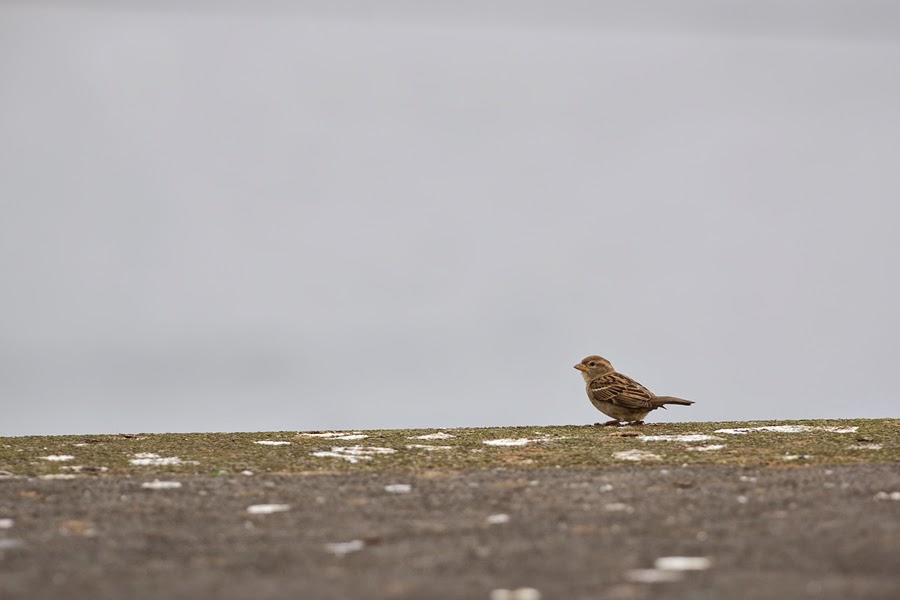 An, as yet unidentified, small, presumably first-winter, gull. 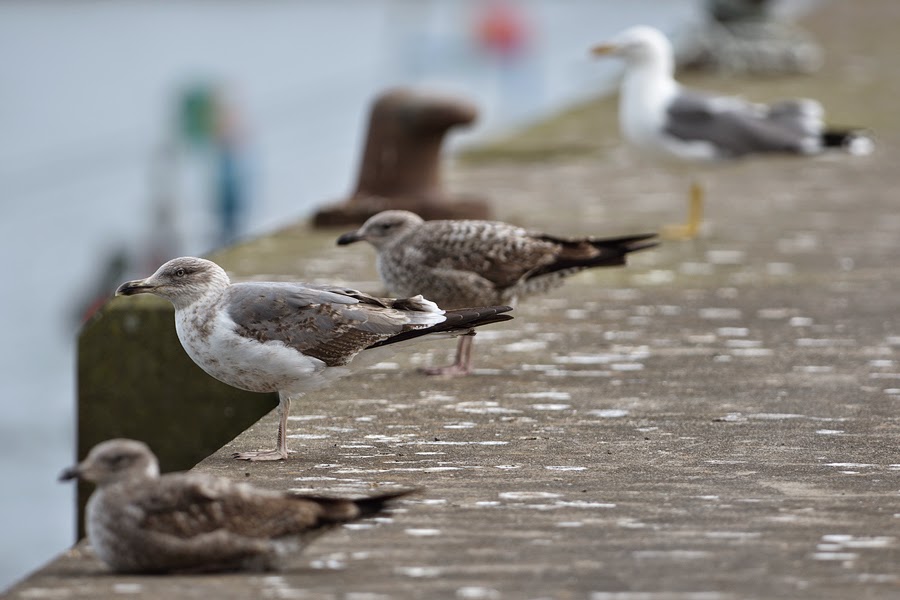 Variously aged 'Azores Gulls' all nicely lined up on the quayside.  On this evidence it appears first-winters and adults can appear very fuzzy, an anti-predator strategy p'raps? 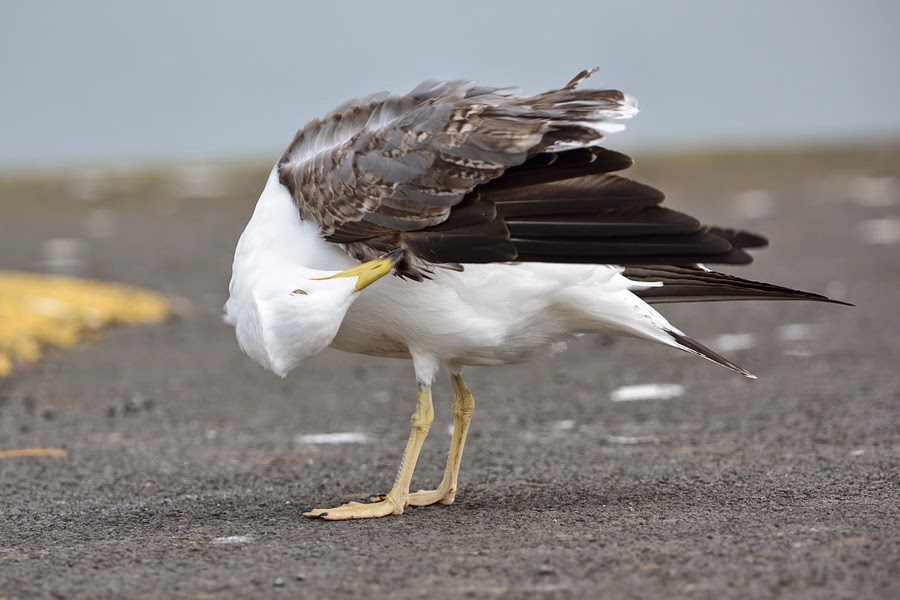 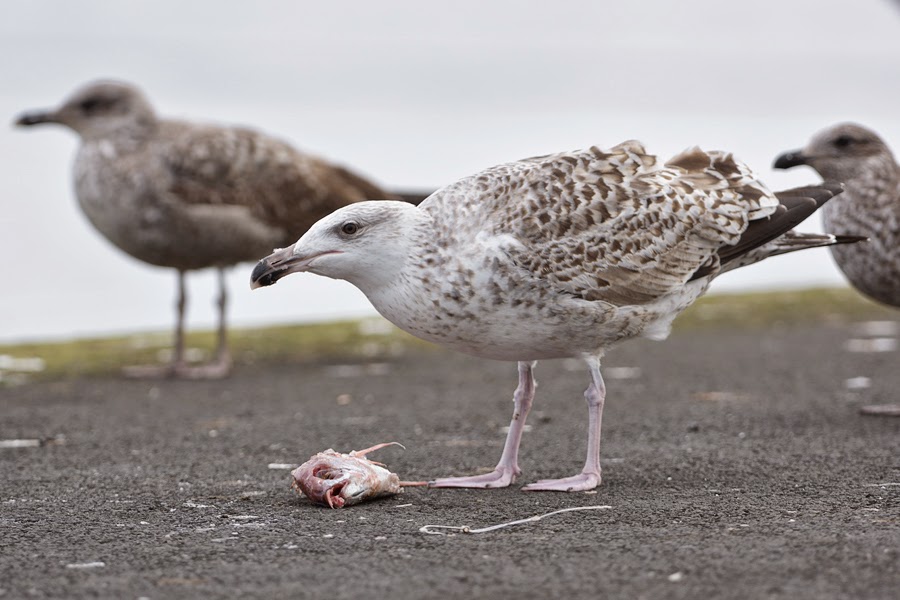 A poorly looking fish.  Luckily this Great Black-backed Gull was on hand to attempt cardiopulmonary resuscitation,... did not go quite as it should.  I should probably have intervened when the gull started by pulling the patient's guts out through his bunghole,... I knew that wasn't what you're supposed to do. 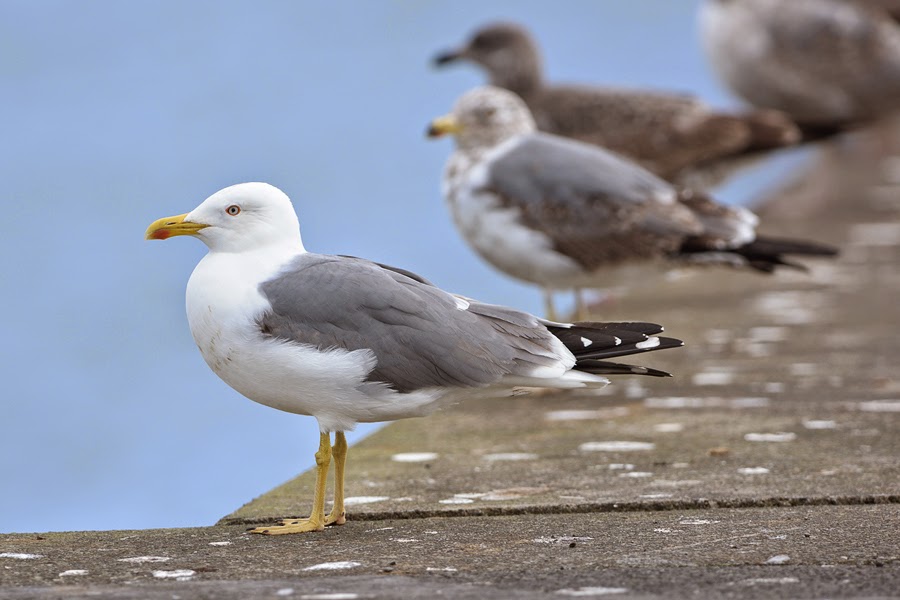 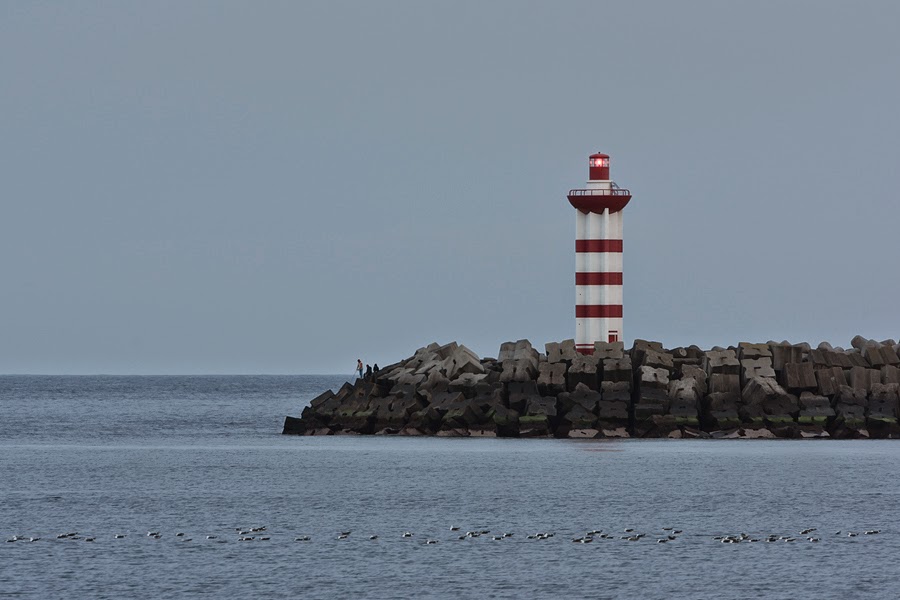 The gull roost in the port at Praia da Vitória.

Posted at 20:07 No comments:
Email ThisBlogThis!Share to TwitterShare to FacebookShare to Pinterest 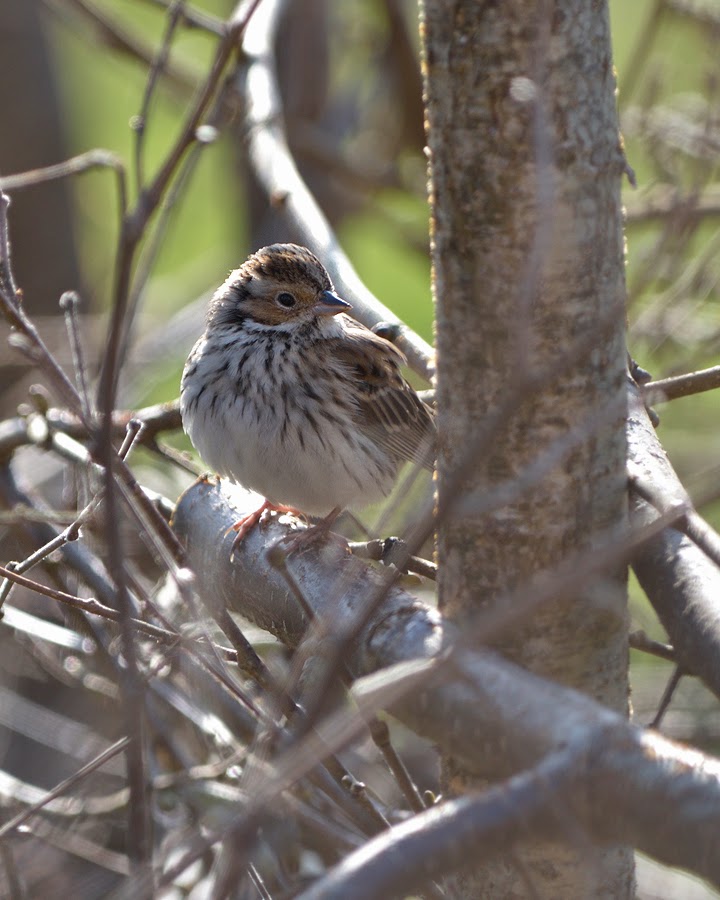 Arrived at the hide 20 minutes after it had 'done one' (largely due to the fact I got horribly lost in the uncharted wilds of Forest Farm).  Waited two hours,... and then a bit,... and then out it popped into the unforgiving midday sun. 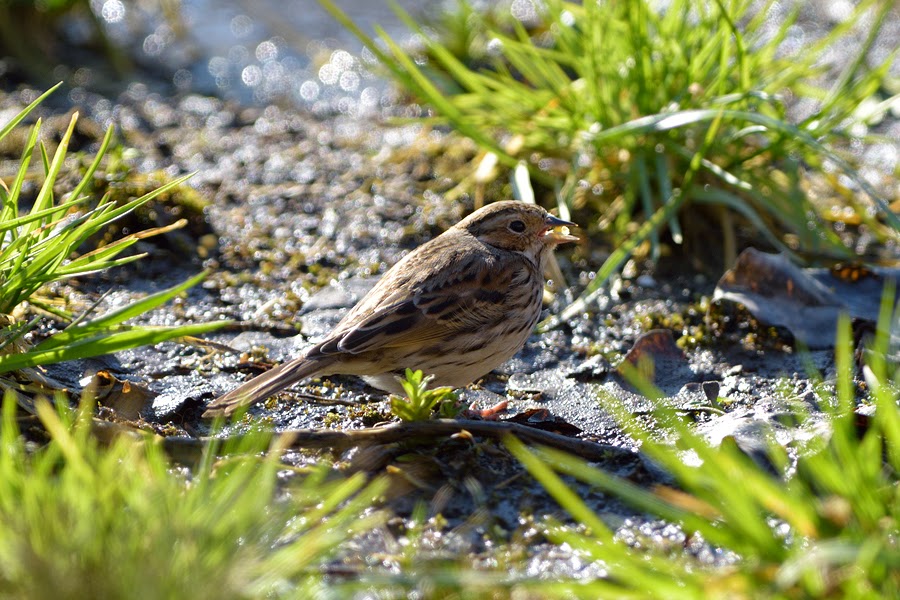 When not sheltering in the hazel hurdles-cum-hedge, the wee fella fed directly in front of the olive-clad throng.  Nice find Messers Powell and Gilmore.

NB.  I should just take this opportunity to bring the readers attention to the borderline subliminal near prediction of this species in last week's post.  Just one county out.  Bugger.
Posted at 19:30 1 comment:
Email ThisBlogThis!Share to TwitterShare to FacebookShare to Pinterest 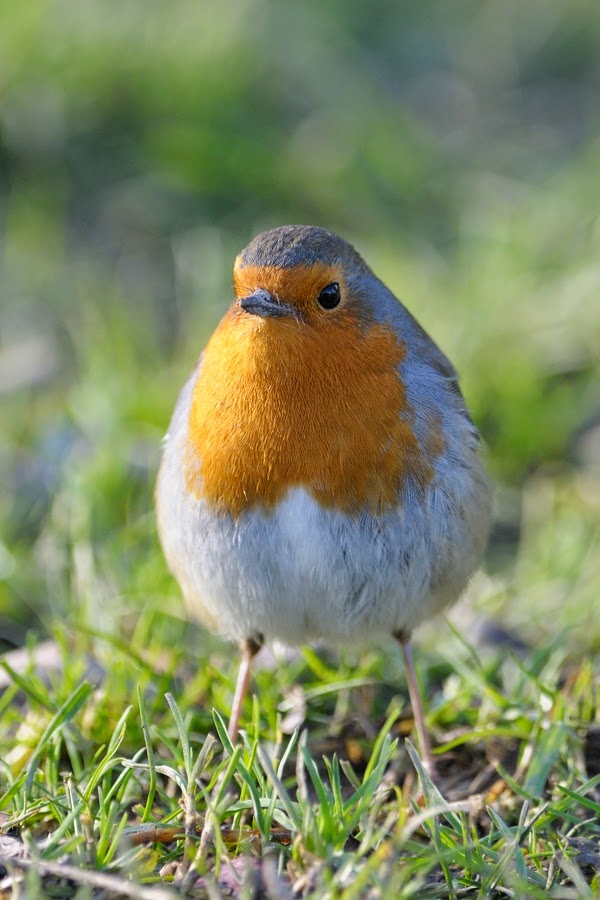 I seem to remember some bright spark once wanting to rename these Orange-breasted Scrub-chat,... or did I just make that up?

Having tired of waiting for Nikon to produce a proper update to the D300 (i.e. something built to be bashed about with an AF-ON button, a decent sized buffer, etc.), I have finally replaced mine with a D810 (which is exactly what Nikon are wanting D300/D300s users to do).  That means three things: 1. there is a slight whiff of melancholia in the air due to the passing of a much-cherished camera; 2. the Robin redbreast pictured above is the last bird to grace my D300’s sensor; and 3. I have a handful of accessories that require a new home, namely,…

2. A Kirk BL-D300 L-bracket for use with Nikon D300 and D300s.  Details available on the Kirk Enterprises website at http://www.kirkphoto.com/L-Bracket_for_Nikon_D300.html

3. Thom Hogan’s Complete Guide to the Nikon D300 (second edition) ebook and Thom Hogan’s Nikon D300 To Go (2nd edition) ringbound real physical book (a compact reference companion to the ebook).  Some information on the series (though not this particular book, which is no longer available) at http://www.dslrbodies.com/books/

If anyone is interested in the above drop me a line (leave a comment below, email gwentbirdingblog@gmail.com, DM me on Twitter, attach a missive to a pigeon's leg, put a message in a bottle, etc.)  All are in a used but perfectly serviceable state.  I will willingly swap them for small amounts of money, failing that, I might be open to barter (e.g. beer, wine, cakes, a good egg-laying chicken, a young goat, etc., etc.)