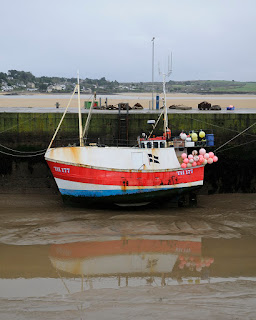 A fleeting moment of not-hoying-down in Steinsville, during which a Black-necked Grebe performed in the harbour entrance. Moments later it came to my attention that my girlfriend's car's battery had developed a fault, information relayed in the form of a clicking starter button and underlined with a £150 bill from the RAC for the joy of being temporarily stranded in north Cornwall.  Being the eternal opportunists that we are, Jack and I snuck off down the Camel Trail and found ourselves a couple of Firecrests in the now expected, and therefore strangely comforting, wind and rain.

An hour later we were off but, before achieving the A30 and its black-topped, multi-laned promise of civilisation, a Corn managed to barrel round a blind bend and destroy our driver's side (rather expensive) motorised wing-mirror assembly before disappearing from our perfectly undamaged rear view mirror in his shitty, murk-coloured Ford Focus. Despite leaping from the car and legging it back up the road, this second moment of car-related mishappedness did not produce Firecrest or, indeed, any other pretty little scarcy.

Posted at 23:35 No comments:
Email ThisBlogThis!Share to TwitterShare to FacebookShare to Pinterest

A morning peering over the placid waters of Carbis Bay and touring the Hayle produced 3-4 Mediterranean Shearwaters, 4 Great Northern Divers and Slavonian Grebe, ably supported by 7 Mediterranean Gulls, 3 Goosander and a Greenshank; all under relatively benign skies. However, an afternoon jaunt to Godrevy Point, proved a red rag to the bullish meteorological gods. The Gannets spread their wings on the icy blast, the chill spray of the rock-beating surf salted the earth, marauding bands of rain came down like wolves on the fold,... and there lay the birder distorted and cold. 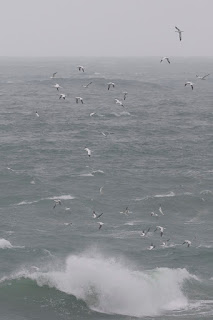 Angels of death feeding frenzy or some such thing or other. 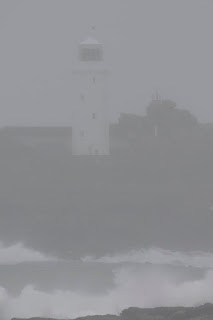 This pretty much sums up the weather for the whole trip, it's times like this when you just have to set your face to the wind, grit your teeth, jump in the car and go home.
Posted at 23:00 No comments:
Email ThisBlogThis!Share to TwitterShare to FacebookShare to Pinterest

Cry 'tristis' and let slip the dogs of war 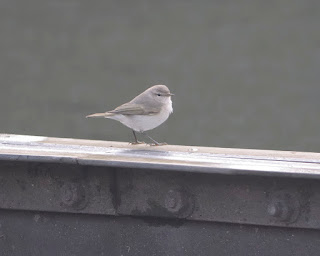 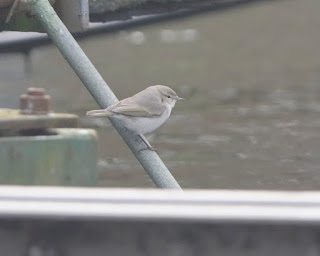 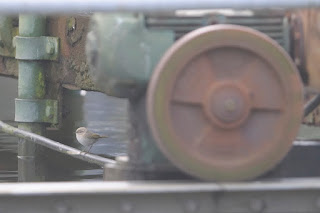 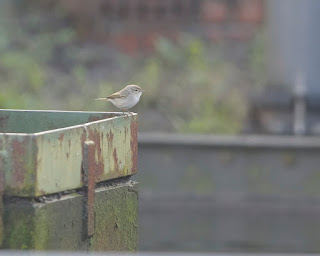 Images 1-4, bird A: overall pale and very cold-toned, all greyish-browns and frosty off-white (further accentuated in this image by the contra lighting and the high ISO and colour noise reduction settings, all of which tend to desaturate the image slightly); the only green/yellow tones are on the edges of the remiges/rectrices and a hint at the alula; the pallor of the crown emphasizes the short dark lateral forecrown stripe which extends to just behind the eye; paleness on the bare parts is restricted to the cutting edges of the upper mandible and the feet. 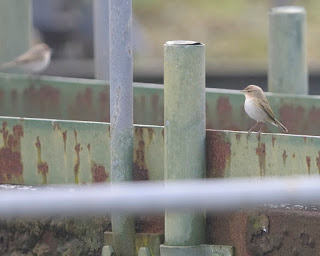 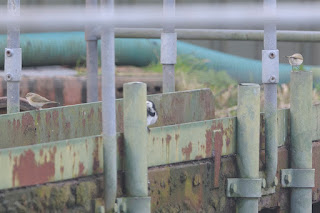 Images 5-6, birds A and B (bird B on the right in image 5, left in image 6): bird B showed slightly more warm ochrous/ochrous-buff tones on the ear-coverts and breast sides than bird A but was still a strikingly greyish-brown individual; both birds showed obvious wingbars due to pale-tipped greater coverts. One of these birds uttered a monosyllabic tristis-type 'peep' twice in quick succession during my initial sighting, however, none of the Chiffchaffs were calling with any regularity, and neither were heard to call subsequently despite observations spanning two and a half blustery hours. 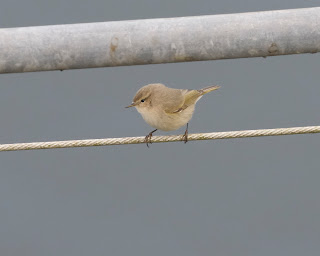 Image 7, bird B: taken from the opposite side of the sewage works compound, i.e. 'with the light', and at a slightly lower ISO setting, note the difference in saturation/plumage tones as compared to images 5-6; this image probably shows the 'truest' impression of bird B's plumage, with bird A being slightly greyer/colder again. Having only heard one of the two birds call, I would only claim one as tristis but, were I local, I'd keep going back until I'd nailed the calls of both,... 'cos I'd be surprised if the second bird didn't go 'peep' too. 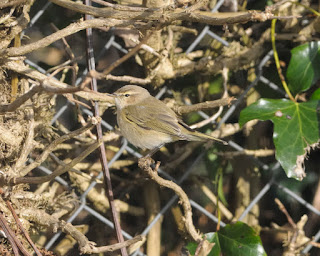 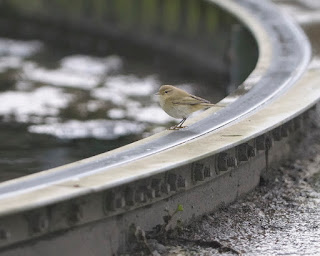 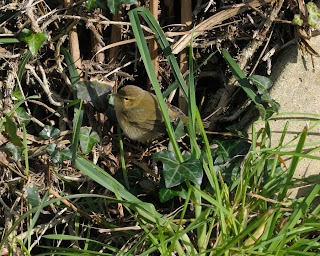 Images 8-10: three increasingly yellow/green toned individuals (there were several others knocking around); the bird in image 8 shows a greyer crown and nape, a reasonably obvious lateral forecrown stripe, and ochre washed ear coverts; whilst the bird in image 10 had lots of yellow in the supercilium and an extensive pale lower mandible. Wouldn't it be nice to pop the bird in image 7 in the abietinus box and 9-10 in the collybita pigeonhole, everything would be so neat and tidy then.

Posted at 23:27 No comments:
Email ThisBlogThis!Share to TwitterShare to FacebookShare to Pinterest 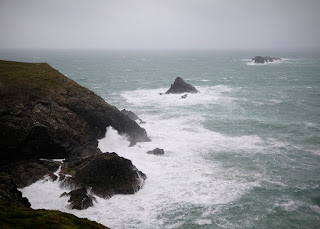 Dinas Head, The Bull and Quies through a glass, darkly.

Posted at 22:30 No comments:
Email ThisBlogThis!Share to TwitterShare to FacebookShare to Pinterest 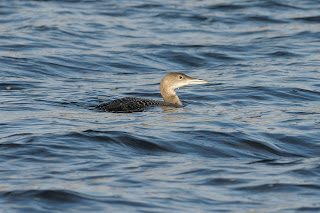 Great Northern Diver, Siblyback Reservoir. The Ring-necked Duck was the best part of a nautical mile away, the Lesser Scaup at Dozmary Pool was none too close either and both left my camera sensor unblemished by their yankee doodle dandyness.
Posted at 18:10 1 comment:
Email ThisBlogThis!Share to TwitterShare to FacebookShare to Pinterest 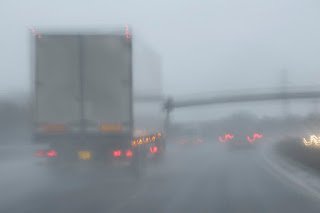 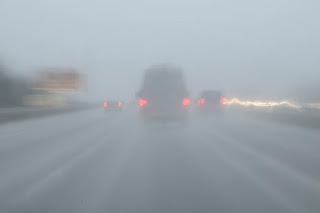 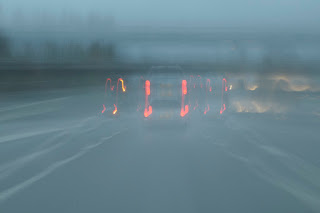 Entering the submarine Atlantis that was once Cornwall.
Posted at 21:55 No comments:
Email ThisBlogThis!Share to TwitterShare to FacebookShare to Pinterest

We'll have toy fights in the hall

A brief scan of the Usk Valley, in between Christmas shopping stops, produced at least 20 Bewick's Swans and a few Wigeon this afternoon.  And then it was off to spend money on brightly coloured paper and adhesive tape of a brand whose name you have probably heard before; both of which, in a few days time will lay strewn on a carpet having been removed by an excited human and then, in all probability, shredded by an over-excited dog.  Money well spent I think we can all agree.
Posted at 23:40 No comments:
Email ThisBlogThis!Share to TwitterShare to FacebookShare to Pinterest

Saw this on Peter's blog and, given that creativity is almost extinct and should probably not be wasted on blogs, I stole his theme and twisted it to my own nefarious ends [NB. Click on the images for larger versions,... or squint]. 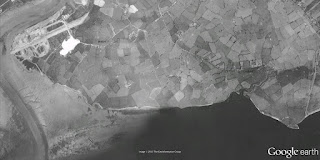 The patch 1945, Uskmouth A power station is already in gestation although it wouldn't open until the early 50s.  Even by this point, it would be a bit late for breeding Red-backed Shrike, Cirl and Corn Bunting; maybe the odd Corncrake would have been hanging on, but I'd bet any of these species would have gone in the notebook in capital letters.  Yellow Wagtail, Spotted Flycatcher, Tree Sparrow and Yellowhammer must all have been reasonably common breeding species; less sure about Grey Partridge and Turtle Dove, though they couldn't have been any rarer than today.  Given the nearby populations, Marsh Warbler must have snuck through on a semi-regular basis. Was Quail regular?  Did Snipe breed? 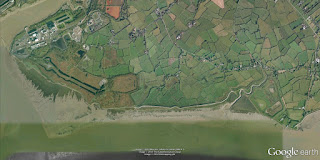 The patch 2012, definitely a greater diversity of species, and a reasonable number of local 'notables' at any time of year (sometimes even a national doozy) but I bet the intervening years' erosion of our avifauna means today's overhead passage is crap in comparison; and the amounts of breeding and wintering farmland dross (Skylark, etc.) must be much reduced.  On the up side, at least birds are in colour now and the vast majority of Gwent is no longer living with sugar rationing.

PS. If your time machine did rock up in 1940s Gwent, I'd suggest you get your arse up country and bag a real county blocker - Black Grouse.
Posted at 23:36 No comments:
Email ThisBlogThis!Share to TwitterShare to FacebookShare to Pinterest

Had a day in the field across the water; one Woodcock and a couple of Water Rail were the best on offer. Was hoping for a flyover Waxwing,... never happened.
Posted at 19:58 No comments:
Email ThisBlogThis!Share to TwitterShare to FacebookShare to Pinterest 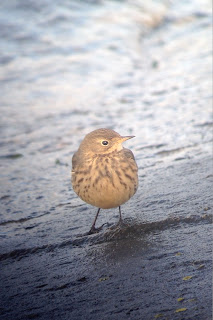 Returning from the office Xmas party involved driving by this little gem, seemed a shame not to pop in. Not having taken my camera or recording gear to the party, I had to make do with recording the event for posterity via the iPhone. If you do ever find a rare without a camera I'd suggest banging the iPhone into video mode and lifting pictures off that, worked OK here, certainly well enough to convince a rarity committee. Mind you, it did help that the bird was showing in the open down to less than two metres.

The video can be seen here, I warn you though YouTube's compression process appears to be awful, and dealing with moving pictures filmed in portrait mode seems beyond them too.

PS. Also Long-tailed Duck and Red-necked Grebe knocking about the reservoir too; and all being overflown by passenger jets every 30 seconds,... lovely.
Posted at 19:17 No comments:
Email ThisBlogThis!Share to TwitterShare to FacebookShare to Pinterest

"What the hell you got there?!" 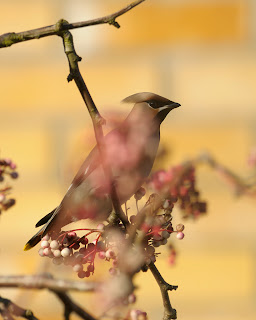 Twitched TC's Waxwings today in the hope they'd be in a nice quiet cul-de-sac and offer up a reasonable opportunity of a recording or two. Found them easy enough, even managed to get within ten metres of the pwetty ickle things but the recordings are only memorable for their comedy value. Front doors slamming, car doors thudding, car engines revving, van engines chugging, fan belts squealing, bicycles whirring, pedestrians scuffing, contractors building (hammering, sawing, 'tidy jobbing'), gardeners gardening; overhead light aircraft towing gliders not yet gliding and passenger jets just fucking the entire soundscape. My favourite end to a recording was a bloke wandering up and providing me with a blogpost title by means of introduction.

Did manage a short recording in which I bagged three different contact/alarm calls in about seven seconds albeit accompanied by a couple of passing nippers,...

Click on the spectrogram for a reasonable sized version and/or, if you can spare 18 seconds in your busy lives, the recording can be heard here.

Post Waxwings, I had 21 Bewick's Swans (including seven juvs/1st-winters) in the Usk valley near Llangybi Bottom and a couple of Goldeneye on the river at Llanllowell [NB. Yes there are six, count 'em, ls in Llanllowell,... madness].
Posted at 23:53 3 comments:
Email ThisBlogThis!Share to TwitterShare to FacebookShare to Pinterest 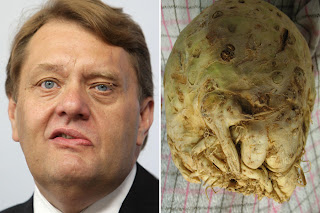 Damn! I was gonna do one of those hilarious lookalike posts (like this one), where I'd put something along the lines of "One of these is a vegetable with little or no grasp of climate change or the necessary measures to minimise its impacts,... the other is celeriac" and then put "celeriac" under the picture of John Hayes and "John Hayes" under the picture of the aesthetically challenged root vegetable; unfortunately, I have forgotten which image is which, therefore totally buggering this opportunity at political satire.

I fear I have let everyone down; my readership, my family, myself. Apologies one and all.

Posted at 19:22 No comments:
Email ThisBlogThis!Share to TwitterShare to FacebookShare to Pinterest

Another random post to keep you going whilst I'm busy trying to get my computer to count birds so I don't have to,... 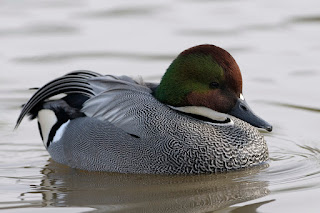 One of the terribly pretty, though single winged, Falcated Duck at Slimbridge from March.