Someone's gotta do it

Given the lack of any response to the heartfelt plea on the GOS sightings page, I feel it's only fair to scribble a brief discussion of the Magor 'Marsh Warbler(s)',...

First off, I dunno what happened on the Tuesday evening, as far as I know nobody but the original observer was present and it seems all the fun the following day occurred at some distance from the location of the initial sighting,... gawd knows!

Wednesday morning, several observers visited the site, including myself, prior to the claim of the bird being present, no Marsh Warbler was heard or seen. However, a Blackcap with an abnormal song was present in the wet woodland behind the hide and, nearby, Reed Warblers were dotting about on the edge of the reedbeds. A short recording of the Blackcap is available here during which the bird begins with a few more-or-less normal phrases followed by a long series of barely separated phrases which take on a very non-Blackcap rhythm. By the way, there is no doubt this song emanated from a Blackcap, I watched the bird opening and closing its bill during the recording.

Anyhoo, I left at around 11:00 without even considering the fact somebody might misidentify the Blackcap for a Marsh Warbler.  Within 45 minutes I started receiving tweets saying the Marsh Warbler had been relocated, I queried whether it had been seen or only heard but, before I could send a message along the lines of 'I had a funny Blackcap there this morning', I was told it had been seen. I was slightly miffed at having failed to find it and proceeded to turn the air a wonderful shade of blue. Then, over the following hours, news dribbled through the various channels that something might be amiss and the consensus of those present was that a, now skulky, Blackcap [a skullcap p'raps?] was the bird singing behind the hide. Presumably, the observer who had claimed the sighting had heard the Blackcap and seen a Reed Warbler.

Strangely, nobody on site appeared to inform the rare bird news services so, when I arrived back at Magor in the evening, to try for more recordings of the Blackcap, people were still appearing thinking a Marsh Warbler had been present, largely on the basis of the "showing well" report,... and that is how I think it happened, largely based on guesswork, half-truths, reading between the lines and half hearing distant jungle drums, feel free to leave a comment if you know any better.

PS. One last thing, whilst I need Marsh Warbler for my Gwent list, and would hate to miss out on a suppressed individual, they are a Schedule 1 breeding species, in the first instance it might be best to inform the county recorder before releasing the news. Birds showing behaviour indicative of breeding may well have to be kept quiet, at least until the chicks hatch.

"We need a futile gesture at this stage..."

If you're going to perform a virtuoso display of blind optimism, best do it in the dark. A nocturnal foray to Uskmouth, a tip of the hat to this year's national Spotted Crake survey, and the inevitable result of precisely no whip-lashery. Oh well, worth a pop,... possibly.

Not a total waste of effort mind; one reeling Gropper, one pipping and a few squealing Water Rail, three Little Owls, one Whimbrel, one Grey Plover, a couple of Ringed Plover and a flyover LRP all made it into the Notes app. 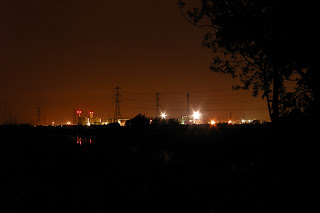 Newport Power Station from the opposite end of the Uskmouth Lagoons. Due to the vagaries of digital photography, this image doesn't do justice to the acute light pollution issuing from the power station, must ask the Newport 'City' Council planning department for a copy of the comprehensive impact assessment that was undoubtably undertaken before this was unleashed on the neighbouring NNR. Note also the chronic sickly glow emanating from Newport beyond,... lovely.
Posted at 00:30 No comments:
Email ThisBlogThis!Share to TwitterShare to FacebookShare to Pinterest

Make up your own pun laden title including 'Ruff'

Another morning of Uskmouth and Goldcliff. Uskmouth was, as yesterday, quiet on the bird front, a lone Whimbrel on the foreshore may well have been the pinnacle. Slightly better on the 'things without backbones' front though; plenty of Hairy Dragons and both Four-spotted and Broad-bodied Chasers plus all the usual damsels, flutterbies and a few day-flying murths. Or, to put it another way, lots of bird food out there.

Goldcliff was a little more exciting, the stilt had gone but one Garganey, a Ruff, two Knot, ten Barwit and six Blackwit all dotted about under gin clear skies. A trickle of larid overhead kept the waders in a state of punctuated agitation whilst their offspring cowered in the, slightly lusher than normal, vegetation. Cute ickle babies of three wader species were noted including my first fledged Lapwing of the year (well, more-or-less fledged, it could fly a few yards when chased by an irate Redshank).  The waders also provided a brief OMGWTFBBQ moment. The Ruff flew into an area of longish grass and thistles at which point a chick appeared and walked straight up to it - I nearly fell off my bench cum stool [hide pew?]! However, normality was rapidly resumed, another perturbed Redshank entered stage right screaming blue murder. I was just about to claim the first record of breeding Ruff for miles around,... I was gonna be famous.

Bet they bred in the wider Severn area back in the day though, when half of Gwent and Somerset was squidgy bog and King Arthur did his shopping in Glastonbury. If they were bigger and more likely to attract punters' cash some muppet would have started a feral population in Somerset by now. The males are all colourful and everything you know,... I give it three years.
Posted at 19:50 No comments:
Email ThisBlogThis!Share to TwitterShare to FacebookShare to Pinterest 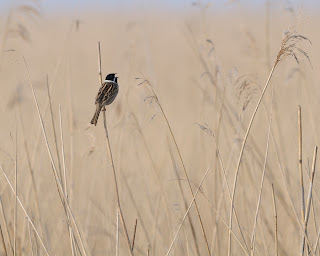 An early morning pottering around Uskmouth,... 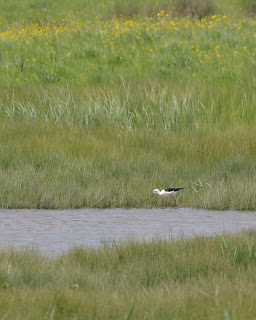 ... should have gone to Goldcliff.


Another troll round for Cetti's Warblers produced very little in the way of bycatch. It also meant I was at the wrong end of the reserve when the Black-winged Stilt arrived.

By the way, the bird looks like a male to me (very black and glossy on the mantle); head and neck plumage is very variable and, going on a conversation I half overheard, may have caused a Piccadilly/Bakerloo moment for some.
Posted at 14:54 No comments:
Email ThisBlogThis!Share to TwitterShare to FacebookShare to Pinterest 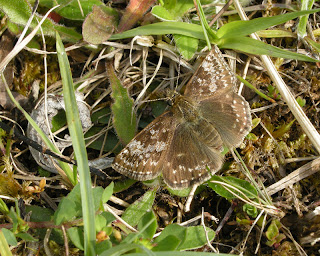 Posted at 21:58 No comments:
Email ThisBlogThis!Share to TwitterShare to FacebookShare to Pinterest 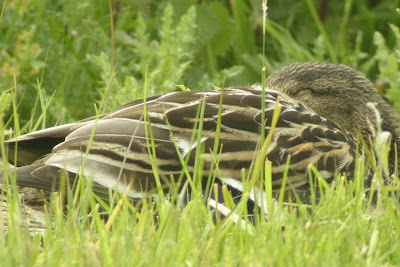 That is all.
Posted at 23:43 No comments:
Email ThisBlogThis!Share to TwitterShare to FacebookShare to Pinterest

What I did on Sunday

On Sunday I went to Boat Lane and I saw a Garganey and two Greenshank and then I went to Goldcliff and I saw a Red Kite and some waders and a Spoonbill dropped out of the sky and then I went home and got my things ready for school and put them in my satchel on the table by the front door so I didn't forget them and have to do PE in my pants again. 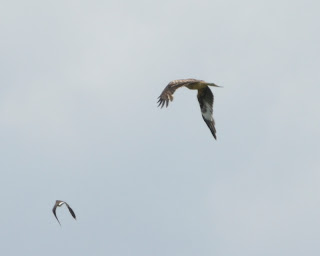 Red Kite, safely added to the 'birds-that-have-upset-the-Lapwings-at-Goldcliff-this-year list'.
Posted at 22:03 No comments:
Email ThisBlogThis!Share to TwitterShare to FacebookShare to Pinterest

Thought I'd give St. Brides another go this morning, not the highest of high tides so most of the waders should have been on, or around, the Costa del Newport. Unfortunately, a local fisherman had taken up position right in the middle of the 'beach'. As a result the birds were dispersed, with most along the rocks between the beach and the lighthouse; they were also pretty flighty, and made flightier still by flyover Kestrel and Peregrine (a Little Egret didn't help either). Finally, when they were on the deck, the westerly had them hunkering down and mostly out of sight; I probably saw less than half the birds on the deck. All in all a bit of a waste of a morning, however, as a reward for my valour and gallantry in the face of barely surmountable birding obstacles, the ornithological gods provided one Curlew Sandpiper, two Sanderling, three Turnstone, 29 Bar-tailed Godwits and 11 Whimbrel.

Having spoken to the fisherman, it is patently obvious that more needs to be done to inform the angling community, et al., about the importance and status of the estuary and its birds.  Given the local importance of the St. Brides roost, the relatively small area it occupies, and the duty imposed on public bodies to further the conservation and enhancement of sites like the Severn Estuary SPA/SSSI/Ramsar, surely something could be done to limit the disturbance caused by fishing along the short stretch between the West Usk Lighthouse and the mouth of the Ebbw.

Over to you CCW, Newport City Council, etc. Not gonna hold my breath,... might go blue.
Posted at 18:42 No comments:
Email ThisBlogThis!Share to TwitterShare to FacebookShare to Pinterest

Where the wild things were today 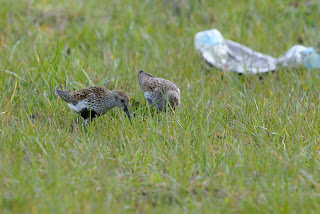 Picking out the Dunlin from amongst the plastic detritus, all part of the fun at St. Brides. About 1,000 of the little fellas were present this morning, a significant proportion of the Severn Estuary population at this, or any other, time of year. 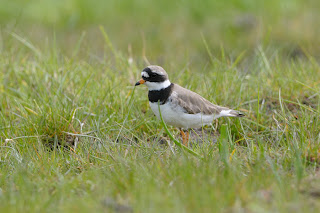 Numbers of Ringed Plover have fallen over the last few days, 200 were present on Saturday, 45 today. The estuary holds nationally important numbers during spring and autumn passage; the numbers at St. Brides constitute a significant proportion of the estuary-wide total.

Neither of the two species above are mentioned in the Appropriate Assessment for this section of the, newly opened, Wales Coast Path. However, it does identify the likely impacts of the path along this section (disturbance to birds and damage to saltmarsh); and suggest the impacts will undermine the conservation objectives of the Ramsar site/SPA (due to "visitors, including dogs, on coast path and accessing saltmarsh: increased disturbance to roosting waders, and damage to saltmarsh"; it then goes on to suggest seven mitigation measures (re-routing the proposed coast path along the landward side of the sea defences; implementation of a dog control order