Both Savi's and Grasshopper Warbler whirring away at Uskmouth this morning.

Still a trickle of birders coming to pay their respects to the Savi's, though they are now outnumbered by an expressionless undead horde of hardcore dudery.  Look down their binoculars, down, down into the distant, diminished eyes and you will see,... you will see nothing,... nothing but vacancy.  Their leaky-milky orbs, opaque, weepy windows into a soulless dusty void; rigid tympanic membranes deafened, unmoving within the dusty crack-waxed auricles; an arrhythmic slurry of vapid syllables oozing intermittantly from their slack, dribble-cornered, jaws.  Oh!  The horror!  What did they do in their past lives to be cast out this way?  Back!  What merry murderers must they have been?  Back I say!  What unfathomable crimes must have been conjured behind those unseeing eyes?  Get thee back into the tempest!  Back!  Back to night's Plutonian shore! 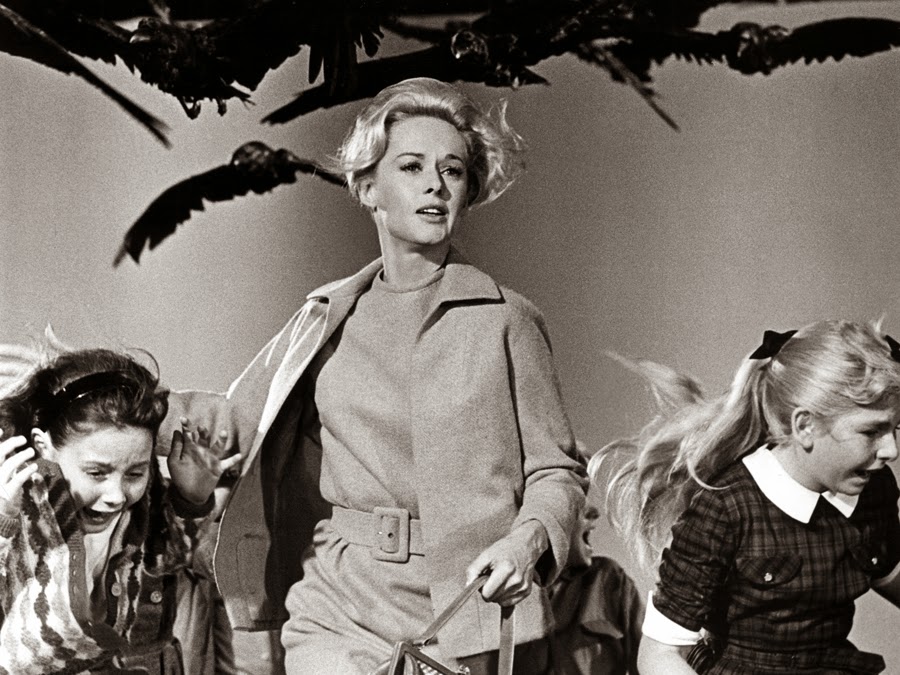 The scene of panic at Uskmouth today, triggered when a recently retired sales executive from Fladbury, Worcestershire, was overheard to mispronounce Cetti's.  The dudes were among them!  Even the crows were terrified.

Posted at 23:26 No comments:
Email ThisBlogThis!Share to TwitterShare to FacebookShare to Pinterest 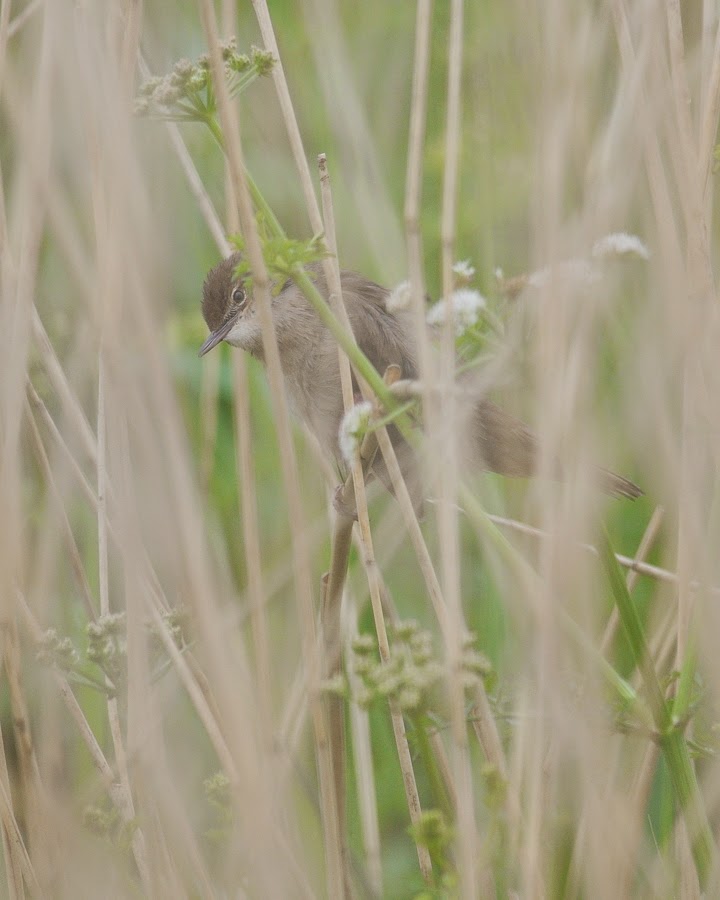 The Savi's Warbler is still present, still singing and still showing on-and-off at close range.  There really is no need to encroach on the edge of the reedbed or to resort to playing MP3 recordings at this bird.

And to the aged pizzle-stick with the 'oops-no-manual-focus-option-bridge-camera-thingy' bemoaning the fact he couldn't get a clear view, standing right up against the reedbed and overheard muttering something to the effect of 'somebody should have cut some of the reeds back' - piss off you ... [the author removed the following text as, even for him, it was "a little bit ranty"].
Posted at 18:16 No comments:
Email ThisBlogThis!Share to TwitterShare to FacebookShare to Pinterest

And lo, it came to pass that Gwent had a good day

Soaked up the Savi's Warbler for a few hours this morning, bagged a few more recordings (one of which is now here) and generally revelled in its whirring glory.  Then, on leaving, I decided to detour via the shelter belt, 'just in case'.  Pottered eastwards, entered said shelter belt, heard Golden Oriole singing.

Quickly recorded a snatch [he said snatch] of song, then flailed around with the phone in an attempt to get the news out from one of the few 3G black spots on the reserve.  Then totally titted up the chance of a good recording as the bird performed, hidden to view, from somewhere almost above me - song, calls, the whole nine yards [note to self, next time make double sure you press 'record'].  After a very quick flash of oriole-shaped/sized bird in the canopy, I had another go at phoning/tweeting/semaphoring out the fact that, for the first time in ten years an oriole was in Gwent.  Unfortunately, despite a small group forming, I don't think it was certainly heard or seen again.  Luckily for all you lovely people, you can go here and hear the few phrases I did shoe-horn onto the CF card before having my techno-brainfart.

... and now a Pectoral Sandpiper has rocked up at Goldcliff.  It's all kicking off!
Posted at 20:01 3 comments:
Email ThisBlogThis!Share to TwitterShare to FacebookShare to Pinterest

Reeling from the Savi's

The Savi's Warbler is still present and, given the slightly better weather conditions, I thought I'd have a go at bagging the song for posterity.  You too can now enjoy the bird in all its mellifluous magnificence by clicking here.

Gawd knows how I managed to get even a half-decent recording above the cacophony of voluntary (and not-so-voluntary) noises emanating from the assembled twitchette.  I should get some kind of award for the meticulous editing out of all the nattering, wheezing, shuffling, sneezing, burping and sharting (if you want an idea of what it sounded like through my headphones try this).
Posted at 16:56 No comments:
Email ThisBlogThis!Share to TwitterShare to FacebookShare to Pinterest 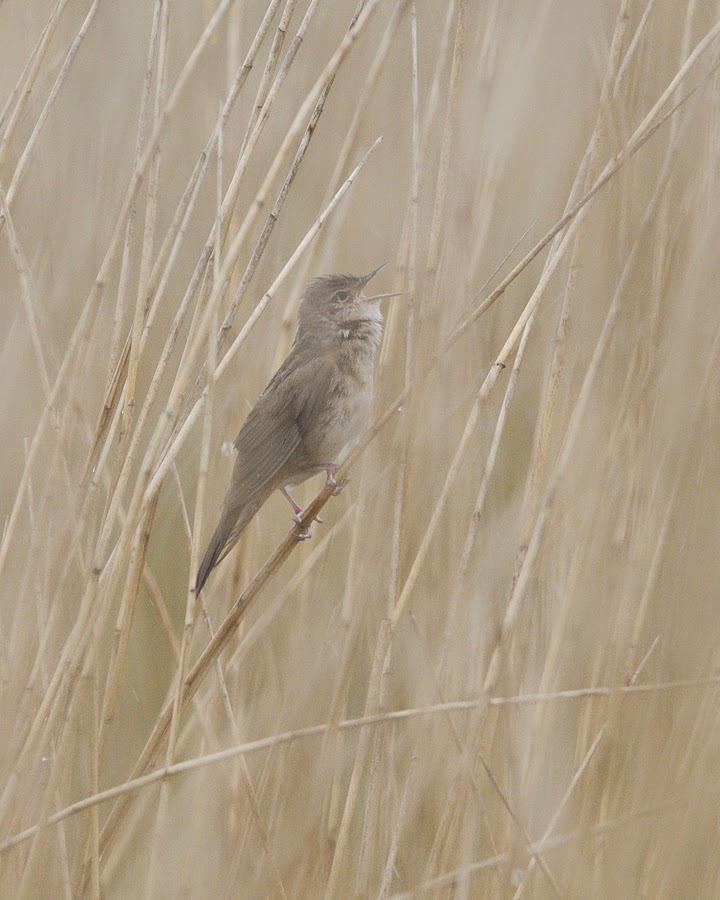 Photo now, words later.  First for Gwent found by Matt Meehan.  Note the rain drop across the eye,... it was hoying it down.  Singing and showing pretty well on-and-off.  Number 201 for the patch list.
Posted at 16:26 No comments:
Email ThisBlogThis!Share to TwitterShare to FacebookShare to Pinterest

An afternoon peering out of the hides at an increasingly soggy Goldcliff produced hardly anything of note.  The tide came in, produced precisely one summer-plumaged Knot, one Ringed Plover, two Curlew and two Dunlin, and then went out again.  Eight Whimbrel had flown east earlier and a fair few House Martin did their best to entertain, but it was, to all intents and purposes, a total waste of six and a half hours of my life that, unless someone gets off their arse and invents time travel, I shall never get back. 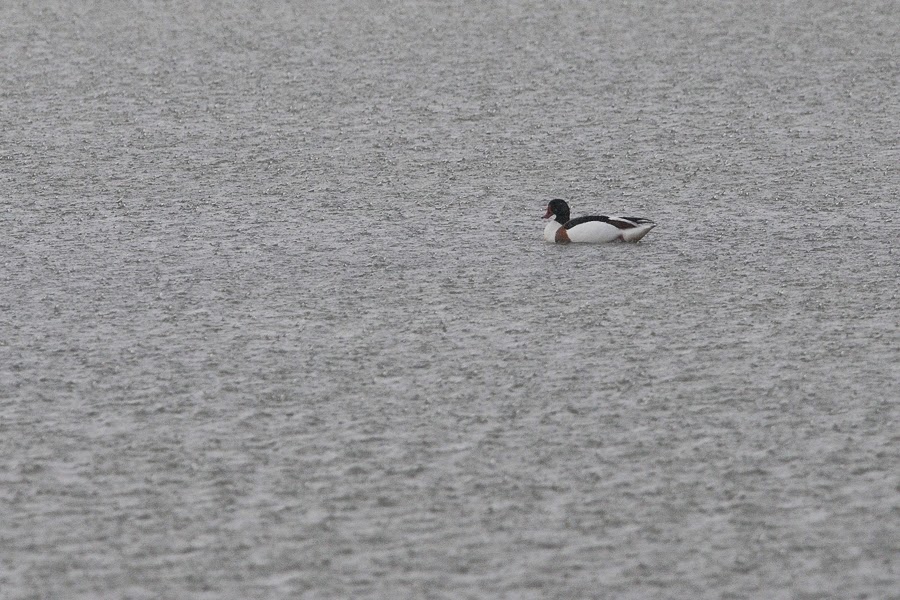 The moistest of Shelducks.
Posted at 21:22 No comments:
Email ThisBlogThis!Share to TwitterShare to FacebookShare to Pinterest

A flying visit to the forest

The post-survey breakfast included homemade honey soaked toast.  With a slight lean to the right, I could see the bees from the breakfast table. 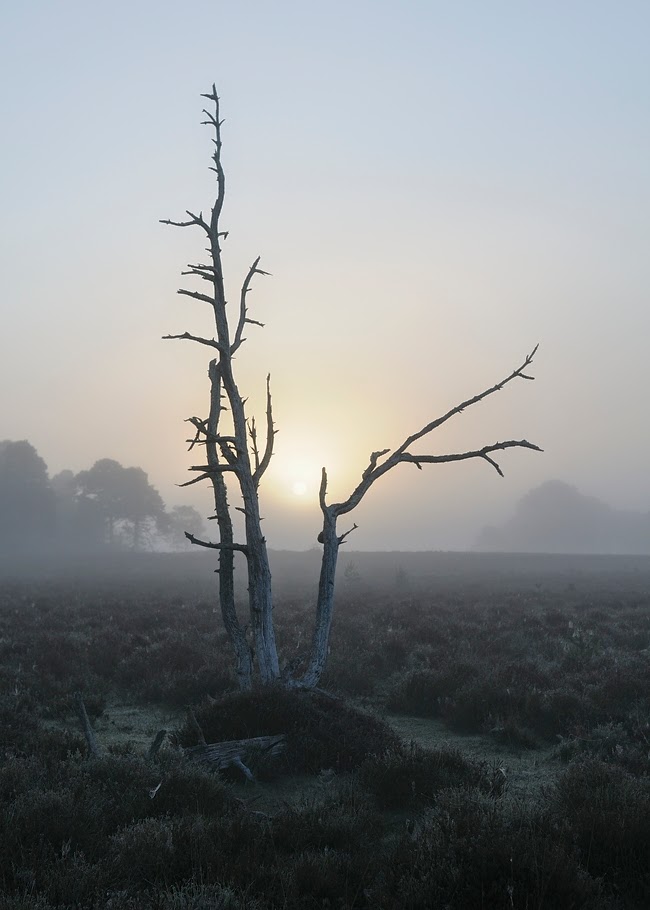 Dawn's misty crack
Posted at 20:31 No comments:
Email ThisBlogThis!Share to TwitterShare to FacebookShare to Pinterest

Managed to carefully avoid the best bird of the weekend, Friday night's Temminck's Stint flitted in and out between my three visits to Goldcliff.  Did manage a few migrants, the weekend's combined totals including: Spoonbill, two Ruff, a fair few Whimbrel, two Yellow Wagtail, two or three Wheatear (one of which was a knackered bird, broken wing, claret on the belly; looked as though it had been got by a predator), Grey Plover, two Curlew Sandpiper and three Greenshank.

Two of the re-introduced Cranes flopped over too.  FYI, when clocking the colour rings on these birds you are looking for three rings on each leg.  All UK birds should be ringed black-blue-black on the left, so it might be best to concentrate on the right leg initially, the rings on which should allow individual identification.  Apparently, birds wandering in South Wales recently have included: 'Tamsin', 'Chocolo', 'Lofty' and 'Gibble'.  If you're struggling to read the rings, perhaps just shout the names out and wait for the bird to turn its head,... bound to work.
Posted at 21:07 No comments:
Email ThisBlogThis!Share to TwitterShare to FacebookShare to Pinterest

That was the weekend that was 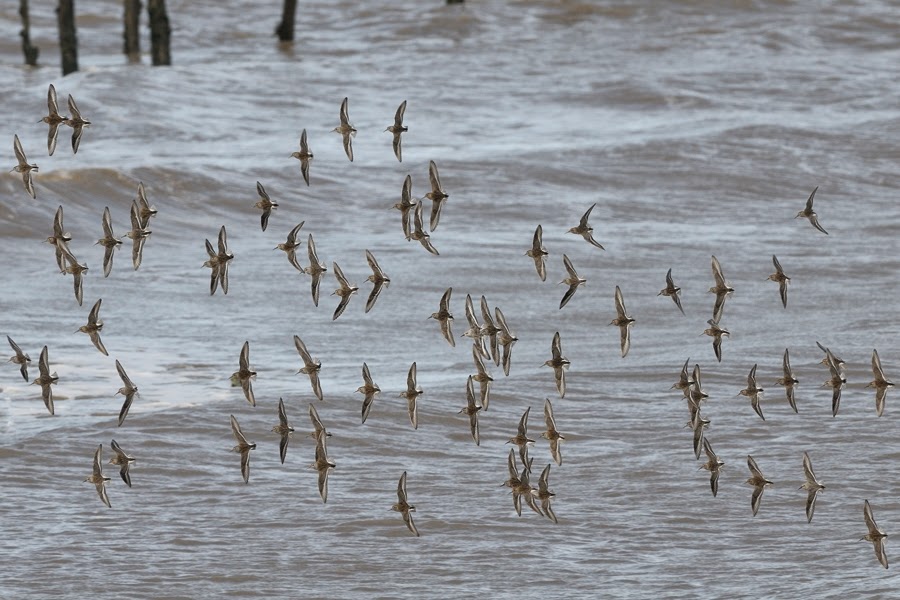 Calidrids at the point, there's a Sanderling in there,... there's also a pale-headed wintry Dunlin,... fill yer boots!

Compared to Saturday and Sunday, it transpired that Friday was a bad choice for a seawatch.  One each of Fulmar, Sanderling and Barwit, and a dose of Whimbrel stopped us from throwing ourselves into the drink but did little to increase the heart rate.  Nothing particularly noteworthy at the pools either, although, an hour or two counting newly hatched nippers and a potter round nest monitoring, did mean I'd gained muddy bins and a vague whiff of saline goo before I made it home.

Popped in on a breezy Ynys-y-fro on Sunday.  Bit of a hirundine/swiftfest,... and then it was home for a cuppa and homemade stodgy chocolate brownie-type things.
Posted at 19:31 No comments:
Email ThisBlogThis!Share to TwitterShare to FacebookShare to Pinterest

Started the day with a garden tick at 04:35; a Cuckoo, somewhere on the opposite side of the valley, its voice stirring the motionless air just enough to reach across the intervening gloom.

Then it was off down Saltmarsh Lane where some ear-catching and slightly out of place 'chirrips' signalled the end of a long wait for Tree Sparrow within the boundaries of the reserve.  A bit of a patch mega and, given the tiny local breeding population isn't showing any signs of increasing, likely to remain so for the foreseeable.  There was very little else down the lane though so, before fatigue and rapidly falling blood-sugar levels took me down for the day, I headed for two cereal bars and Goldcliff.  Despite the fact that a Crane lumbered over westward, the two male Garganey were about the best of the pools.  A few years ago the Crane would have been worthy of red-letters and much celebratory swearing but is now, thanks to the 'The Great [sic] Crane PRoject', reduced to being written off as the semi-feral escape that it probably was.  Of course, due to the fact that this bird went over at no insignificant altitude, and photos failed to rule in or out the presence of colour rings, we will never know if we chucked away the second, albeit highly unlikely, patch mega of the day.  The true status of Crane in the UK is now utterly buggered due to our collective inability to capture the public's interest with naturally occurring wetland wildlife and, instead, opting for an ornithological distraction technique aimed at the lowest common denominator.  To paraphrase Frankie Boyle, it's the equivalent of some guy from the WWT, RSPB, or wherever going "Look at the big shiny shiny bird",... "No need to make the effort to appreciate what's already here",... "Look at the big shiny shiny bird." 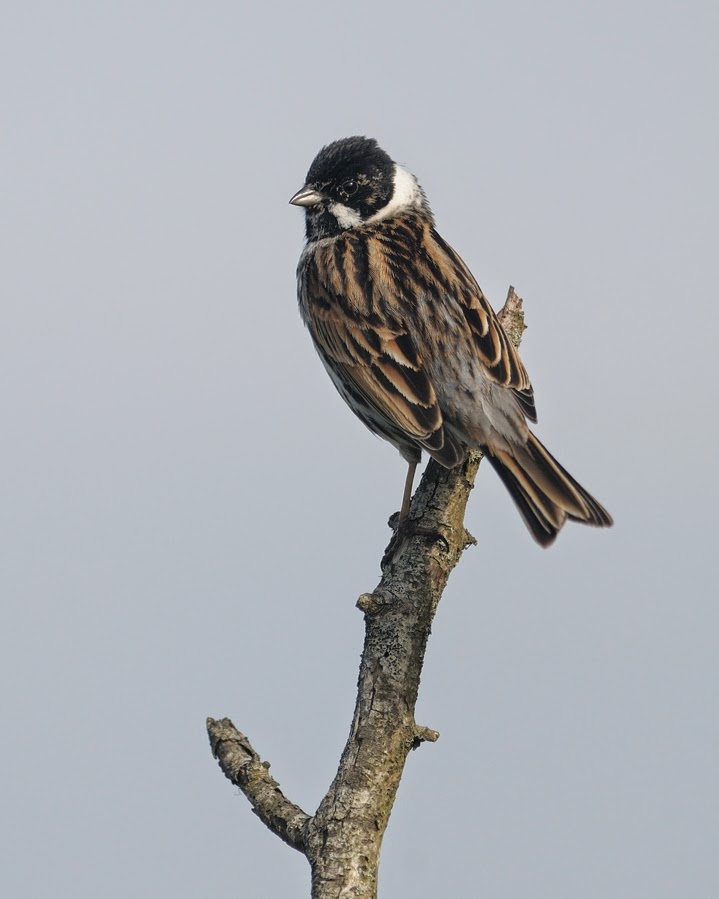 Not the best songster in the world ever but they do play ball don't they.

PS.  Please note the title is, as I'm sure you know, a reference to a Kurt Donald Cobain quote about the dawn chorus and nothing to do with one's anti-pointless-reintroductions rant.  Boing.  Time for bed.
Posted at 20:42 No comments:
Email ThisBlogThis!Share to TwitterShare to FacebookShare to Pinterest

All a little subdued 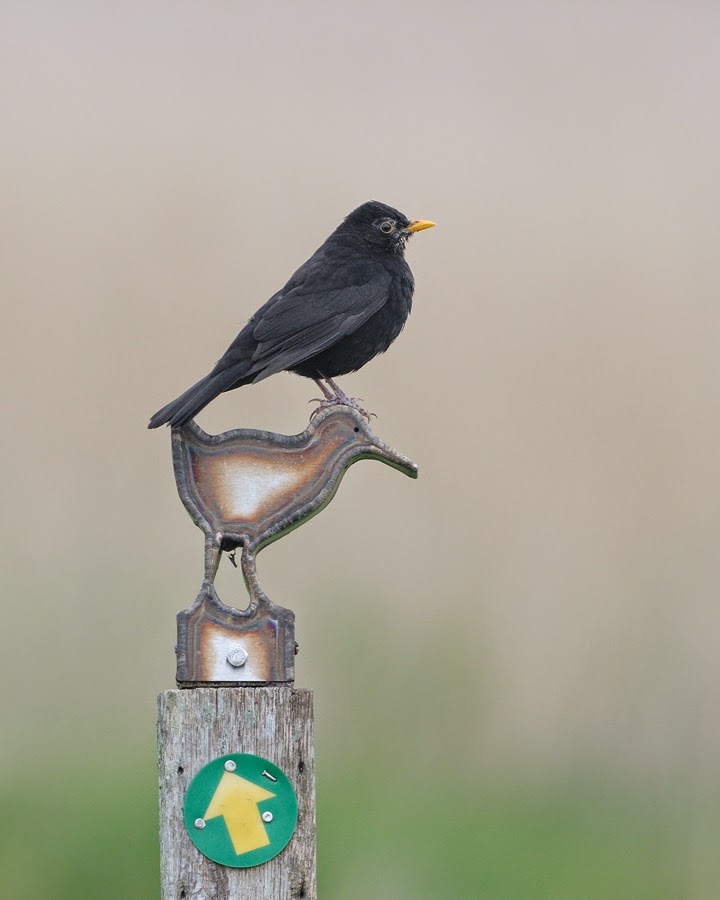 A bit of Blackbird on Water Rail action.

All a bit low key today.  Only Whimbrel and Wheatear were on the move at Uskmouth, although the immature male Marsh Harrier did do his best to brighten up the, otherwise overcast, Cetti's Warbler survey.  At Goldcliff, two Garganey, a Common Sandpiper and a few Swift high overhead were the highlights.  All manner of ickle babies are starting to appear though, taking on the cute baton from the rapidly-becoming-too-big-to-be-cute lambs.  Laaaavely.
Posted at 18:45 No comments:
Email ThisBlogThis!Share to TwitterShare to FacebookShare to Pinterest
Newer Posts Older Posts Home
Subscribe to: Posts (Atom)