Posted at 22:22 No comments:
Email ThisBlogThis!Share to TwitterShare to FacebookShare to Pinterest

Kneel,... kneel before my photographic prowess

It was actually quite fun out there today. The spin-offs of a second morning seeking Cetti's Warblers at Uskmouth included: a male Whinchat (looking as classy as ever; not sure how they pull it off, it would be very easy for a Whinchat to look a touch garish, cheap even, but they always manage to avoid toppling into tits-out, tabloid, tartiness,... well done them), two Grasshopper Warblers (one of which leapt from the grassy verge and sat in full view a couple of metres away), one Lesser Whitethroat (of which there was nothing to add in parentheses after the species name), one Tree Pipit, seven Whimbrel, five Whitethroat, one Grey Plover, two Cuckoo, large numbers of Sand Martin and Swallow, and just two Wheatear (yesterday's hordes had passed on, although, by the sounds of it, only to be replaced by another wave this afternoon).

Then it was off to Goldcliff which was literally* dripping in ornithological gems, including: an adult Wood Sandpiper which flew strongly SW after half an hour or so, three Pale-bellied Brent Geese (two adults and a 2nd cal-year bird), one Shoveler x Cinnamon Teal hybrid, one Tufted x Ferruginous Duck hybrid, one Ruff (yesterday's male), the long-staying Spotted Redshank, one White Wagtail, 130 House Martin, 10 Swift, five Wheatear, five Whimbrel, one Grey Plover and 10 Knot.

This formula of 'brief introductory phrase' + 'colon' + 'wittily** annotated list of species' is probably the laziest form of blogging I have yet sunk to. I predict it will remain the Gwent Birding house style for some considerable time. 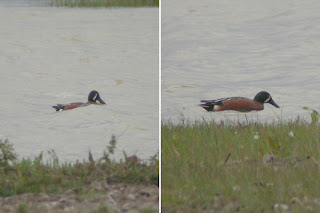 Shoveler x Cinnamon Teal hybrid. I blew the last dregs of my Coolpix's batteries on recording the sheer nerve-tingling, chimeric, mind-boggliness of this anatidine [should that be anasine(?)] beauty, as a result, there are precisely no photographs of the spangly Wood Sandpiper and I was reduced to cobbling together a toilet roll and a small piece of light-sensitive paper to obtain a likeness of the Pale-bellied Brent Geese on the pill,... 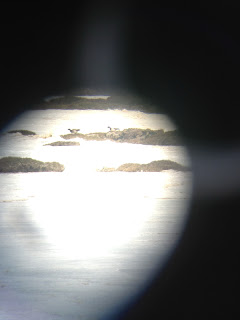 In all seriousness, I'd like to take this moment to thank Steve Jobs for everything he brought to the world, without his dynamism, leadership and foresight this piece of iPhone art would never have graced your retinas, and your visual cortex would, obviously, have been a much poorer piece of squidgy grey goo.

* not literally
** devoid of all wit
Posted at 22:24 3 comments:
Email ThisBlogThis!Share to TwitterShare to FacebookShare to Pinterest

It's raining Wheatears,... and rain,... obviously

Apparently my nightcap is ready so, with brevity as my watchword,... whilst ineffectually dodging raindrops this morning, I saw the following,...

Uskmouth: 9 Whimbrel, 1 Short-eared Owl, 2 Swift, 1 Cuckoo, 9 Sand Martin, 2 House Martin, Swallow 65+, 1 Tree Pipit, 23 Wheatear, 7 Whitethroat and enough Willow Warblers to fill a large hessian sack (the old type the General Post Office used to use back in the day, when they were hung at the side of railways and whisked away by noisily snorting trains in a swirl of steam and soot [by which I mean,... back in the rose-tinted days of innocence, before we/they knew how much fuck-uppery was being done by burning all that carbon and chucking particulates into the lungs of apple-cheeked children playing 'chicken' on the bridges]). Oh,... and 1 Bar-headed Goose (on the foreshore with his Canadian missus).

Another day, another tide

Having pretty much seen all Goldcliff was likely to offer, I joined two other members of the 'Coldra Roundabout Irregulars', pottered over to Northwick Warth,... and failed to see the Red-throated Pipit; year-ticked Little Ringed Plover though and watched a few Wheatears in the rain. That is, they were in the rain, I was dry as a bone, all tucked up snug as a bug in a breeze-block bunker.
Posted at 22:54 No comments:
Email ThisBlogThis!Share to TwitterShare to FacebookShare to Pinterest

Category E is where it's at

Nothing too exciting on this morning's high tide. Passage waders included: 1 Spotted Redshank, 1 Greenshank, 1 Black-tailed Godwit, 56 Knot, 9 Dunlin, 5 Ringed Plover and just 4 Curlew. Passerine migrants were pretty scarce too with 1 Yellow Wagtail and 8+ White Wagtail on the deck and 10+ Swallow heading NW. Of course, the real quality was, as ever, provided by the escaped wildfowl with both Chinese and Bar-headed Goose lighting up the place with their radiant beauty and sunny dispositions. 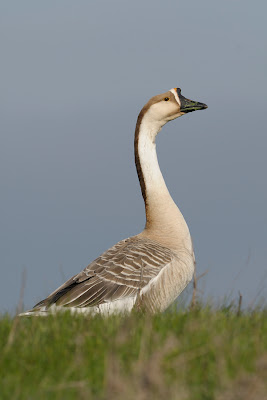 Chinese Goose the domesticated form of Swan Goose,... but not *actually* a Swan Goose. What a looker!

PS. Saw my first widdle bubby wader of the year today, a Lapwing, down in front of the first hide.
Posted at 16:08 No comments:
Email ThisBlogThis!Share to TwitterShare to FacebookShare to Pinterest

Today three hours walking into the wind like a demented street mime was interspersed with three hours being blown back down the sea wall,... how much fun can you have in Gloucestcestcestcesteravonshire? One Sandwich Tern, two Whitethroat, 28 Kittiwakes, three Whimbrel, 10+ Wheatears and 20+ Swallows all appeared in front of the optics for varying amounts of time, largely depending on whether they were going with, or against, the sprightly breeze. The showers were mostly dodged, those that weren't were met with a stoicism of which, though I say it myself, Zeno* would have been proud. 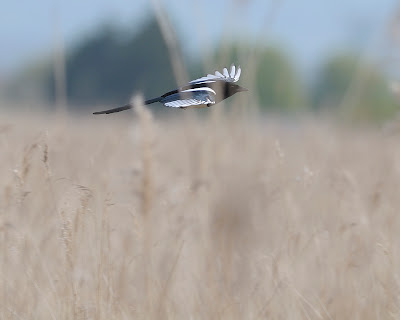 Longish tail, rounded wings, flying low over the reedbed, that'll be a Bearded Tit then.

Generally quiet at Uskmouth this morning, the Redstarts appear to have cleared out to be replaced by little Redstart-sized birdless voids in the landscape. A Cuckoo, 15 Reed Warblers, four Sedge Warblers, one Whimbrel, two Swallow and eight Sand Martin were about the sum of what I bumped into.
Posted at 19:09 No comments:
Email ThisBlogThis!Share to TwitterShare to FacebookShare to Pinterest

A circuit of Saltmarsh Lane, Farmfield Lane and the eastern end of Uskmouth was a bit of a Redstart-fest this morning; two stonking males and a couple of less stonking females were dotted around the easternmost Uskmouth lagoons. Also a Tree Pipit in the hedgerow along Saltmarsh Lane, four Whimbrel and 10 alba wags on the foreshore, and a few Swallow, Sand Martin, Sedge and Reed Warblers popping up here and there.

When are the RaSPBerries going to realise that if you attract tens of thousands of people to a nature reserve you have a responsibility to help manage the flipping predictable result?
Posted at 17:33 No comments:
Email ThisBlogThis!Share to TwitterShare to FacebookShare to Pinterest

The other side of the Severn produced today,... and, naturally, stayed sunny throughout. A fun few minutes was provided by an Osprey flopping up-river at 09:20, handily escorted by a vociferous Lesser Black-backed Gull. However, more persistent entertainment was supplied by a continual trickle of migrants including: five Yellow Wagtail, a handful of 'alba' wagtails, one redpoll and a reasonably large, though unknown (because I stopped counting), number of Sand Martin and Swallow.

You can stop wondering, spring has sprung, of course it might recoil again in the face of a northerly blast but it has sprung, I know,... because I was there.

PS. Willow Warbler, Blackcap and Chiffchaff are so 'in' their songs are now being filtered out to clear an aural pathway along which more interesting songs can saunter. Today, none did.

PPS. A few hundred yards further up the sea wall Little Ringed Plover, House Martin and Tree Pipit cavorted in front of my colleague, he missed the Osprey though, so we'll call it quits.
Posted at 20:32 No comments:
Email ThisBlogThis!Share to TwitterShare to FacebookShare to Pinterest

Popped in on the eastern end of the Uskmouth reedbeds to see the extent of damage following yesterday's arson. Approximately half of Reedbed 10 has been burnt which, I'm reliably informed, amounts to roughly five hectares or just below 10% of all the reedbeds at Uskmouth. If anyone saw anything suspicious yesterday, or sees anything suspicious in the future, it can be reported to CCW reserve staff on 01633 275813; or the local Police Wildlife Liaison Officer on 01633 244999; or RSPB staff on 01633 636363. Click on the ropey panorama below for an idea of the damage.

Reedbed 10, or rather, what is currently left of Reedbed 10. 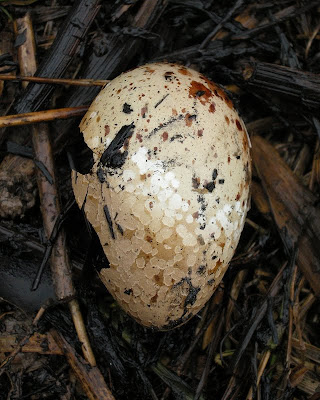 PS. A male Cuckoo was singing in the rain just north of the burnt area.

At Goldcliff on the falling tide: one male Cuckoo over west, three alba wagtails over north-east, 22 Ringed Plover, three Black-tailed Godwit, 53+ Avocet and the looooong-staying Spotted Redshank and 'Chinese Goose'.

And that was that.
Posted at 19:54 No comments:
Email ThisBlogThis!Share to TwitterShare to FacebookShare to Pinterest

Did the first morning of this year's 'Oooh-let's-go-and-work-out-how-many-Cetti's-Warblers-are-out-there' survey today. Rocked up at dawn plus a bit and, at first looks, it seems the Cetti's have recovered a little from last year's nadir but there are still a few great yawning gaps in the territories.

In other birding news,... the returning Chiffchaffs and Blackcaps have now reached saturation point (with Pochard and Bearded Tit not far behind), but other slightly-more-notables included: one Sedge Warbler, two Sand Martins, two aythya hybrids, 85 Knot and three Willow Warbler.

And then the joggers, dog-walkers, cyclists, playground aficionados, speed-walkers, cafe/shop devotees, ignorers of 'no access' signs and partakers of bizarrely loud conversations arrived,... so I left.

PS. The female leucistic Wigeon is still present at Boat Lane.
Posted at 22:34 No comments:
Email ThisBlogThis!Share to TwitterShare to FacebookShare to Pinterest

It was all a bit quiet around Boat Lane and Goldcliff Pools this morning. The situation was not helped by a couple of khaki clad chaps shooting rabbits at the end of the lane; and, later, a family (complete with a trio of spaniels [Cocker or Springer or Field or some such similar sub-standard substitute for a labradoodle]) pottering along the seaward side of the lagoons at Goldcliff, totally oblivious to alarm-calling Schedule 1 waders.

I did, however, bump into a not-quite-ready-to-start-singing-properly Willow Warbler of which you can read a little more and hear here. Go on, you know you wanna.
Posted at 20:09 No comments:
Email ThisBlogThis!Share to TwitterShare to FacebookShare to Pinterest
Newer Posts Older Posts Home
Subscribe to: Posts (Atom)