More news from the eastern front

Yet another sojourn to the eastern wilds produced the goods. Whilst wandering down to the estuary near Mathern a rather dumpy passerine caught the eye. As it flew across a field I clocked white bases to the primaries and (self-doubt to the fore) momentarily thought I was seeing things, as it turned out, I was - a Hawfinch. Luckily it dropped into the next hedge, where it remained happily consuming Field Maple seeds until we got bored and wandered off. 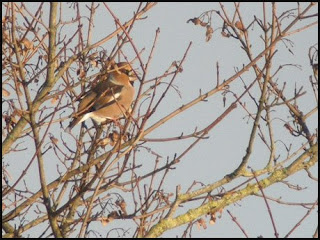 Earlier the Neddern produced nothing more exciting than the Black Swans, the Scaup appears to have departed. Matthern village was nothing special either, however, it did add another point on my 'places on the levels where I have seen Coal Tit this autumn' map.
Posted at 19:50
Email ThisBlogThis!Share to TwitterShare to FacebookShare to Pinterest