Given that the world-renowned 'See-see wadi' at Birecik is one of the more Tattoine-like places on the WP birding circuit, it should have come as no surprise to meet Ben Obi van den Burg halfway up said wadi. Peter and I became instantly star-struck, lost all self-control, and launched straight into a classic cheerleader-esque chant which started "Give me an A" and went right through to "Give me a G" despite the fact no-one had 'given us' any of the intervening letters; there followed a slightly embarrassing moment before we managed to paper over the cracks by exchanging information on various bits and bobs. In comparison to Arnoud the best birds paled into near insignificance although See-see, Pallid Scops Owl, Pied Kingfisher, Menetries' Warbler, Iraq Babbler, Dead Sea Sparrow and Yellow-throated Sparrow did vie with the aforementioned hirsute Dutchman for notebook space. 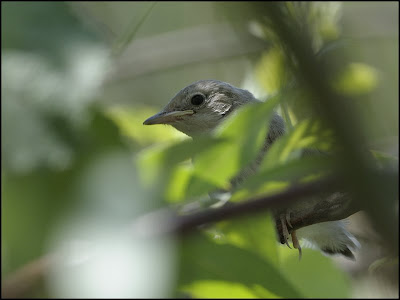 An ickle baby peering out from the riparian scrub/woodland alongside the, rather large, Euphrates River.
Posted at 21:37
Email ThisBlogThis!Share to TwitterShare to FacebookShare to Pinterest