Oops, forgot to add a title

Spent one of the better hours of the day breakfasting in the charming village of Halfeti not seeing Bonelli's Eagle and having to make do with more Little Swifts. We then explored a couple of tracks off the road back to Birecik. The first produced Cream-coloured Courser; and the second a roadside pool whose avian visitors included: Pale Rock Sparrow, Lesser Short-toed Lark and Desert Finch. We then embarked on the drive to Mardin. This journey was punctuated with: Lesser Kestrel; a drive up (and down) an unopened motorway; an aborted attempt at driving up a motorway slip-road in the wrong direction (during which two non-plussed Turks shot past going the other way); Short-toed Eagle; possibly the most entertaining road in the world ever (the D400 between Sianlurfa and Mardin); and two more Cream-coloured Coursers. I am now sitting in a hotel perched atop an outcrop overlooking the vast Mesopotamian plain. The Lonely Planet, displaying its signature reverse-snobbery, describe the Büyük Mardin Oteli as an eyesore,... what a load of wank. 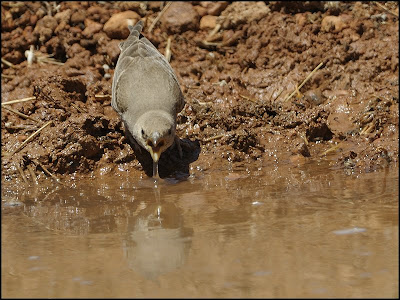 Pure art, a Pale Rock Sparrow, complete with reflection, throwing-up after a hard night on the Raki.

PS. Just found out there's a Lesser Flamingo up-country, a slight change of plan is in the air.
Posted at 20:41
Email ThisBlogThis!Share to TwitterShare to FacebookShare to Pinterest