Another image of a gull which is probably only of interest to a very small number of people on the opposite side of the world, once again, feel free to move onto the next inconsequential ornithological blog on your regular round of interwebbery. 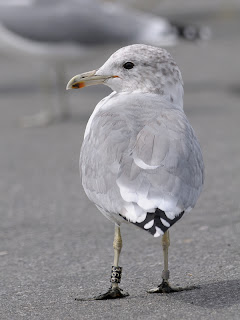 Colour-ringed adult California Gull (left leg - white code '366' on black darvic; right leg - federal metal band, partial code '055-10177'), Palo Alto Baylands Nature Preserve, 13th September 2010; this bird is in active primary moult hence the 'stubby' rear end, and had less extensive head streaking than most being fed by the Hispanic guys in the parking lot near the Lucy Evans Interpretive Center. Finally, the mantle appears paler than it was due to the angle, and strength, of the sun.

[Addendum: dead impressed with the response time of the BBL/USGS/CWS the gull had originally been caught by a bander from the Coyote Creek Field Station on 9th May 2009, so I guess it hadn't come too far and won't be breaking any longevity records.]
Posted at 22:52
Email ThisBlogThis!Share to TwitterShare to FacebookShare to Pinterest