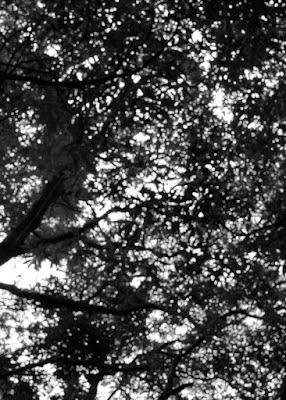 “When a man is asleep, he has in a circle around him the chain of the hours, the sequence of the years, the order of the heavenly host.  Instinctively, when he awakes, he looks to these, and in an instant reads off his own position on the earth's surface and the amount of time that has elapsed during his slumbers; but this ordered procession is apt to grow confused, and to break its ranks.  Suppose that, reclining in a ribeira, say, after a lunch of ham and cheese rolls, sleep descends upon him while he is staring up at the canopy: then the world will fall topsy-turvy from its orbit, his chosen cradle will carry him at full speed through time and space, and when he opens his eyes again he will imagine that he went to sleep months earlier and in some far distant country.  Not knowing where he is, he cannot be sure at first who he is; he has only the most rudimentary sense of existence, such as may lurk and flicker in the depths of an non-birder’s consciousness; he is more destitute of human qualities than the city banker; but then the memory, not yet of the place in which he is, but of various other places where he had birded, and might now very possibly be, would come like a rope let down from above to draw him up out of the abyss of not-being, from which he could never have escaped by himself: in a flash he would traverse landscapes formed over untold millennia, and out of a half-visualised succession of stone walls and vegetation, would put together by degrees the component parts of his ego.”

Yep, another grey and rainy morning in Gwent,... how did you guess?


NB. Quotation marks may have been misused and abused in the production of this bog post.

Posted at 12:56
Email ThisBlogThis!Share to TwitterShare to FacebookShare to Pinterest