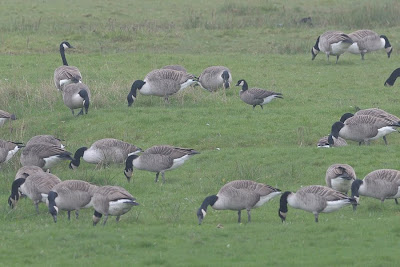 Hanging with the homeboys,... 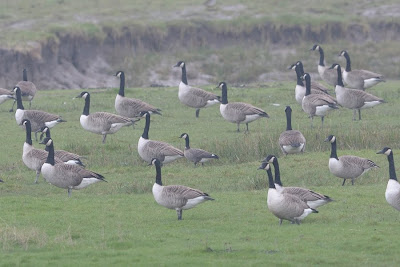 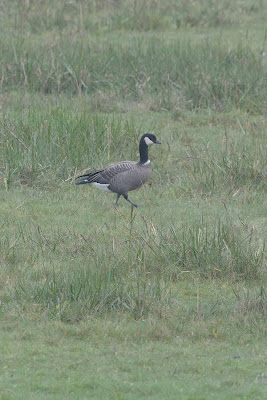 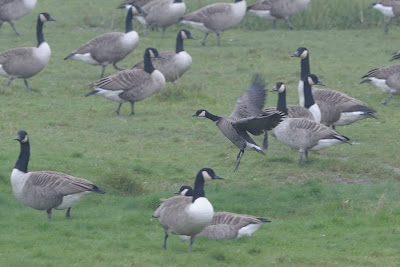 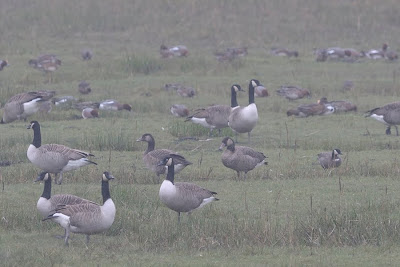 Keeping his head down, "Who let them in?!"

The dark-breasted hutchinsii-type Cackling Goose spent the morning on Goldcliff Pill, as did the two Canada x Greylag hybrids. Yesterday morning's Greenland White-fronted Goose was present on the grasslands but, for long periods, was hidden from view,... and Barney is still in his field.

PS. This bird is being reported by RBA as an escape, I would suggest 'of unknown origin' is a better label. This bird has occurred at the 'right' time of year, is the 'right' age, has arrived at roughly the same time as hutchinsii-types elsewhere (Islay [2], Sligo [3], Mayo [1], Donegal [1] and Somerset [1]), has arrived with another transatlantic species (Greenland White-fronted Goose, [only the second for Gwent]), is behaving like a wild bird, lacks any signs of captivity, has arrived at the same time as other transatlantic geese appearing in the region (Pale-bellied Brent Goose and Black Brant in Glamorgan), and is on the western side of the UK. OK, so there are lots of hutchinsii-type Cackling Goose in captivity and Gwent isn't Islay (and all the points above have a slight whiff of desperation hanging over them) but, if you keep a Welsh or Gwent list, you should probably make the effort to see it.
Posted at 20:50
Email ThisBlogThis!Share to TwitterShare to FacebookShare to Pinterest