An hour into our return to Pembs and it didn't look good; a Black Redstart had popped up, a Lapland Bunting had gone over and two or three misplaced Water Rails had been logged in amongst the very 'birdy' fields and hedgerows, but there was a distinct lack of shrike. Then, a bit of long distance, mobile communication orchestrated, wizardry, resulted in us locating the lovely little critter sitting on the 'wrong' side of a nearby hedge. After another temporary disappearing trick (during which, entertainment was provided by a first-winter Hen Harrier) the bird resurfaced, eventually working its way back to the, now almost famous, five-bar gate, at which it showed down to not many metres at all. 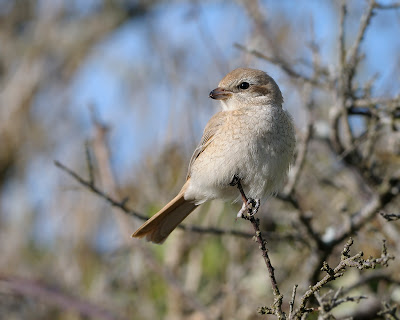 A quick nose around in the bottom of the valley failed to result in the hoped for Pallas'/Yellow-browed/Firecrest but was punctuated with a brief heart-stopping moment when I noticed an amorphous, pale sandy, blob in the bottom of some dense scrub. The colour wasn't unlike the flanks of American Woodcock, but this is not why the moment was heart-stopping, no, the anxiety occurred on realising that I was not observing it, it was observing me,... the hunter had become the hunted,... I had come face to face with the Pembrokeshire Panther. Posted at 19:25
Email ThisBlogThis!Share to TwitterShare to FacebookShare to Pinterest