Where not to watch birds in Gwent: Caldicot Moor

The long-awaited second instalment of this once-every-37-months feature takes in the delightful Caldicot Moor.

Location - Just south-east of Undy; from junction J23a of the M4 head south and then bear left (signposted Magor), at the mini-roundabout turn right and stay on the B4245 for approximately 4.5 km through Magor and Undy. On reaching Llanfihangel near Rogiet turn right onto the minor road signposted Severn Tunnel Junction Station. After approximately 0.5 km you will pass the station on your left, head over the bridge crossing the railway and then, almost immediately, the bridge over the M4. On crossing the second bridge you have arrived at the eastern end of the moor.

Access - The majority of the moor, can be viewed from the main track (telescope essential) which you join by turning right at the T-junction approximately 200 m from the M4 bridge mentioned above. This track runs south-west across the moor before reaching another T-junction (turn right) and then another (turn left); it then joins a minor road which can be followed to Undy and the B4245. On the left, 600 m along the main track, is Fisherman's Lane, a track leading to the sea wall.

Species - Very few species of bird have been located at this site making it another of the premier sites for not watching birds in the county. Apart from seeing a very small number of Buzzard, Kestrel, Lapwing and Skylark, this afternoon I managed to not watch birds during most of my visit. 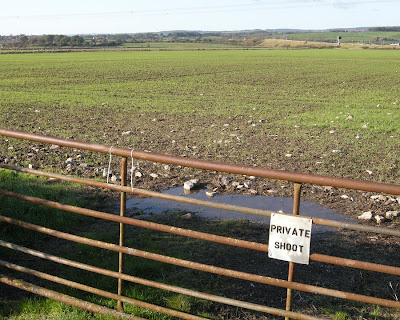 Caldicot Moor, probably best to stay to the track or you might get shot in the privates. 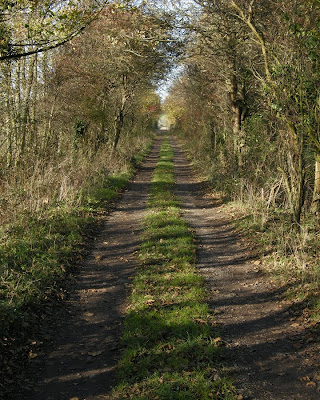 Fisherman's Lane, tree-lined along its southern half, but for lying under a Gwentish sky, it would look ideal for a Yellow-browed Warbler or Firecrest.
Posted at 18:16
Email ThisBlogThis!Share to TwitterShare to FacebookShare to Pinterest